Written by Cheryl Threadgold
CHERYL THREADGOLD continues her portrait of actor, director and producer J. Beresford Fowler, picking up his story in 1916 when he enlisted as a soldier in WWI and left Australia for the battlefields of France.

Jack Beresford Fowler enlisted on 10  July 1916 to serve his country in World War One, having left Bert Bailey’s Australian tour of  On Our Selection after two years. His soldier training soon commenced in Melbourne’s Domain before transferring to Seymour to join the Third Pioneer Battalion. When the Bailey and Grant company passed through Seymour returning from a Sydney season, Jack was granted leave to meet them at Seymour Station. With no dining-cars on the trains in those days, Seymour was a refreshment stop. Jack reckoned the kisses he received from the theatre company ladies were the envy of the Military Police and reasoned good-naturedly that soldiers expected ‘the natural feminine response to our heroism in volunteering for “the big scrap”.’ 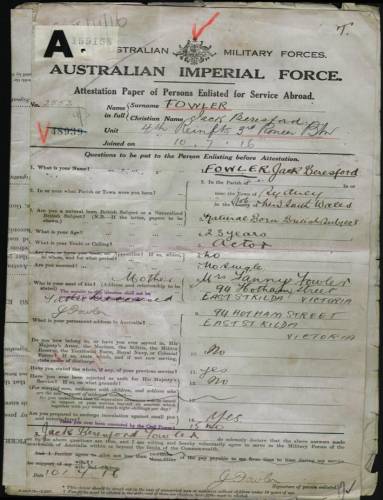 On 21 October 1916, the Third Pioneer Battalion embarked for England on the troopship Port Melbourne, sailing around the Cape of Good Hope and Sierra Leone to avoid mines and submarines in the Suez Canal. During the ten-week voyage Jack participated in debates and concerts, with his most popular monologues derived from C.J. Dennis’s The Sentimental Bloke and Ginger Mick.

After arriving in England and training at Larkhill, Jack was assigned to the Dental Unit in Salisbury Plain for eighteen months. Although grateful for his mechanical dentistry training  in Melbourne which secured this position, Jack confided feeling uneasy ‘with so many fine cobbers on the other side of the duck-pond’ (cryptic term for The English Channel). During limited leave, Jack saw famous theatrical stars of the era in shows and festivals in London, Edinburgh, Glasgow, Bath and Stratford, including unknown young actor Noel Coward playing a small part in Scandal with Arthur Bouchier. Jack also enjoyed entertaining troops with his Battalion concert-party, including a proud performance in a production number at London’s Aldwych Theatre, where he recited ‘The Singing Soldiers’ from C.J. Dennis’s Ginger Mick.

In March 1918, all available soldiers were summoned to the Somme, and Jack joined his Third Pioneer Battalion at Heilly. A talented entertainer and cricketer, Jack conceded he was, however, not a particularly good soldier, especially when digging trenches with blistered hands. ‘I was out of my element in the Pioneers doing pick and shovel work, but I had some good cobbers.’ The soldiers engaged in infantry work at Villiers Brettoneaux, Bray-sur-Somme and Tincourt. During a lull, Jack wrote a one-act play titled The Dame of Corbie, which he presented at Corbie after the Armistice. One night Jack accidentally walked into enemy lines. After his mates brought him back, Jack queried how they knew with nothing on the track as a guide. They blamed his being a ‘city bloke’.

Jack Fowler wrote little of war’s horror and grief, pointing out ‘the war has been written by many able pens.’ In A Puppet’s Mirage, he describes slain bodies beside a road: ‘They were silent voices that spoke more eloquently than any saga or epic of the greatest epoch in history.’

Allied Forces launched ‘the big push’ on 8 August 1918, a huge Western Front offensive to push through enemy front lines. News of signing the Armistice and peace arrived on 11 November as Jack’s Battalion awaited orders to return to the line for what they believed would be the final great battle. When the Battalion later moved to Daours for sporting recreation, Jack captained a cricket team and managed the sports store in Huppy, another French village, before returning to Salisbury Plain and entertaining troops in the concert-party.

In August, 1919, Jack arrived home on the troopship Rio Pardo after another ten-week voyage, once more via Sierra Leone and The Cape. His mother and brothers met Jack in Melbourne in a hired car decorated with the Third Battalion’s purple and white colours. Jack wasted no time re-joining the Bert Bailey and Julius Grant Company and toured for twelve months with On Our Selection, Grandad Rudd and Duncan McClure, all adapted from the works of Steele Rudd (pseudonym for Arthur Hoey Davis).

Jack then independently staged his own amateur production of Ibsen’s John Gabriel Borkman at The Playhouse, located just over Princes Bridge, playing the lead role of John Borkman. In a dramatic opening night, Jack’s leading lady was said to have suffered a nervous breakdown in the dressing-room and all takings were returned to the audience. Professional actor Emmie South was hired to learn the part over the weekend, but the leading lady recovered and the production was well received by audiences and the press.

Extracts from Melbourne newspaper reviews reflect high regard for Jack Fowler’s shows at this time: ‘A very successful entertainment much above amateur standard was given at The Playhouse last night’ (The Age); ‘J. Beresford Fowler as Borkman achieved a notable success’ (The Herald); ‘An absorbing play … J.B. Fowler gave a realistic portrayal of Borkman …’ (The Sun); ‘The part of John Gabriel Borkman, egotist, ruined bank manager, who bartered love to further his ambition, was capably taken by Mr Fowler’ (The Argus). Jack then staged a successful Australian premiere production of Ibsen’s Ghosts. In May, 1922, The Pioneer Players invited Jack to stage manage Louis Esson’s play The Battler at The Playhouse before English actor/manager Allan Wilkie employed Jack as actor/stage-manager in Australia’s first touring Shakespearian Company. 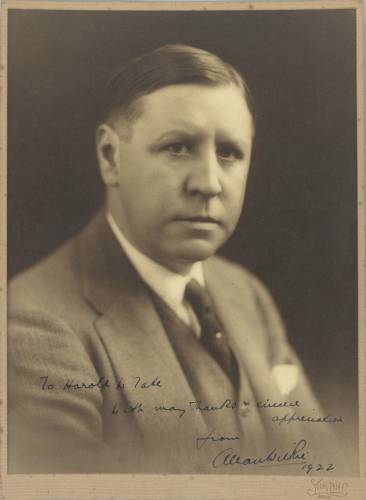 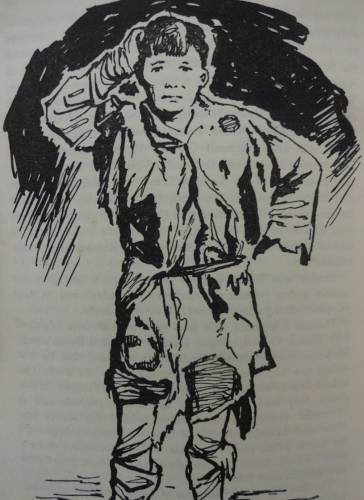 Jack Beresford Fowler as Grumio in The Taming of the Shrew, 1923—Allan Wilkie Shakespearian Company; illustration by Vernon Hayles

From Stars in My Backyard: a survey of the Australian stage by J. Beresford Fowler, p.62

In professional theatre, Jack’s shortish stature was ideal for character roles and one of his favourites was playing Grumio in The Taming of the Shrew.

Three years later, Jack believed his sacking from Allan Wilkie’s company was due to requesting a sleeper when travelling to Sydney (to which he was entitled), after having just joined the Actors’ Federation. Regardless of his sacking, Jack remained indebted to Wilkie for sharing his knowledge of acting and producing Shakespearian plays, and they remained friends after Wilkie disbanded his company in 1930 and returned to England.

Buoyed by the success of his earlier independent productions, Jack made ‘the momentous decision’ to form his Art Theatre Players in 1925. He chose The Queen’s Hall for the company’s first production, The Doll’s House by Henrik Ibsen. The theatre’s location in Collins Street, almost opposite The Athenaeum Theatre was convenient, but its tiny stage proved challenging for larger shows.

Packed audiences enjoyed A Doll’s House, revivals of John Gabriel Borkman and Ghosts, and Hedda Gabler. The plays were again well-received by the press, with The Argus reviewer writing: ‘Hedda Gabler was played last night with the same high standard of skill that The Art Theatre Players have shown in their handling of other pieces.’

More praise followed for Jack Fowler in a review by The Age for Ibsen’s The Wild Duck: ‘This is not the first occasion on which this courageous and enterprising actor-producer has delighted drama lovers with the production of this truly great play, but it is certain he has never achieved such success as that which signalled last night’s splendid performance. It was a perfectly cast production and The Queen’s Hall was packed to capacity’.

Pages from the theatre programme for ‘A Season of the Greatest Modern Plays’ presented by the Little Art Players, February-March 1926 at Queen’s Hall, Collins St., Melbourne

Jack moved larger shows to The Playhouse, but began encountering difficulty for the plays to pay their way. The first of two productions for bushfire relief was Man and Superman presented in conjunction with The Players’ and Playgoers’ Association. One critic wrote: ‘Bernard Shaw and Beresford Fowler in pleasing collaboration: and with the advantages of the bigger Playhouse stage and real scenery against the dog kennel platform and monotonous green curtain of Queen’s Hall, Fowler’s Little Art Company begins to live.’

The second bushfire relief production was Othello’s third scene between Iago (Fred MacDonald) and Othello (Jack Beresford Fowler). A production of Shaw’s Major Barbara later followed at The Playhouse. Jack also worked with Bert Bailey in a professional season in Adelaide of The Sentimental Bloke in September, 1926, playing the crook ‘Spike’ Wegg.  In 1929 when Gregan McMahon returned to Melbourne from Sydney to work under the J C Williamson banner, he engaged Jack as stage-manager. Based in Melbourne to be near his beloved St Kilda football team, Jack also presented shows in Ballarat, Bendigo, Geelong, Albury and Colac. 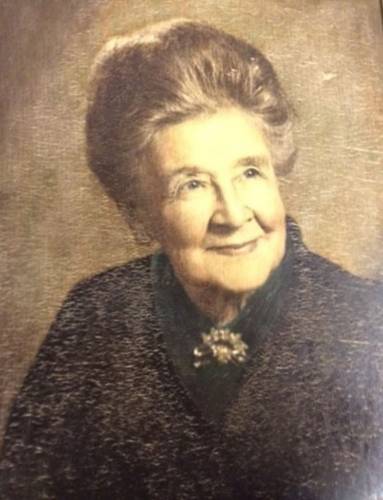 In 1942 Jack collaborated with friend and fellow actor Sylvia Archer to write the controversial stage play General Sir Hector MacDonald (a play in nine episodes), a defence of a Scottish soldier who suicided in 1903 when accused of homosexuality. The Melbourne Argus wrote, ‘The authors seek to clear the name of one of the most tragic figures in the history of the British Army.’ Positive reviews included from the Scottish newspaper in Ross-Shire where Hector MacDonald was born. In contrast, The Lord Chamberlain in England banned its production and George Bernard Shaw described the play as ‘unpleasant and economically impossible in commercial theatres.’ General Sir Hector MacDonald received a public reading in Melbourne, but was never performed onstage. Several libraries purchased copies, but Jack believed its ‘scandalous nature’ prevented it being placed on library shelves. The manuscript is now available from State Library Victoria. 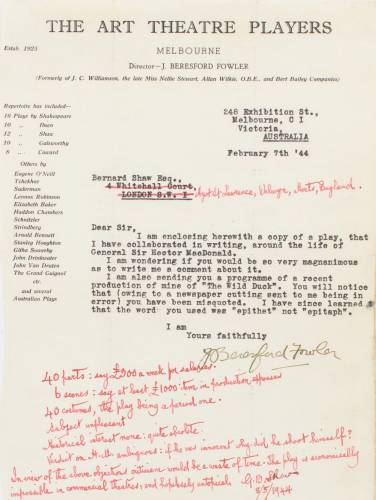 By courtesy of The Hon. Dr Barry Jones, AC

Jack Beresford Fowler was a passionate, talented theatre maker but no businessman. He would later admit his mistake in not realising that whether broke or not, productions must be kept up to standard, and now they were not. He attempted to present too many shows, putting them on quickly with insufficient rehearsal ‘in an effort to get three meals a day and a roof over my head.’ He believed jealous enemies were showing their teeth, ‘gathering like vultures around my carcass.’ A war pension at this time would have been a huge financial help to Jack, but with savings from professional work now exhausted, he had no money left to live on.

The press began ignoring Jack Fowler’s shows and some newspapers were annoyed he responded to criticism. In hindsight Jack regretted doing this, conceding ‘it is probably more harmful to be ignored, especially when you have been accustomed to more eulogism than attack.’ Jack would later reflect: ‘The productions went off and my reputation sank to zero.’

Although financially poor, Jack Beresford Fowler remained culturally rich, modestly acknowledging: ‘On their own small scale, my productions over three decades were worthwhile.’

JCW Producer Gerard Coventry’s advice to young Master Fowler forty years earlier was not forgotten, and would fuel J.B.’s optimistic, indefatigable spirit for coming decades: ‘Persevere for success and never give up or lose heart.’

More in this category: « JCW: A Scenic Tour Frank Thornton: Man of Many Faces »
back to top