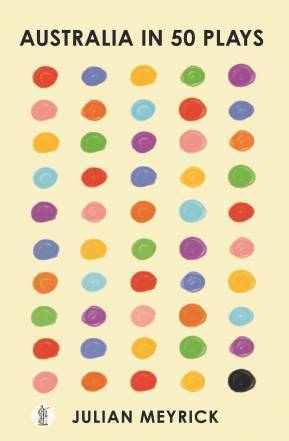 Any notion that Julian Meyrick’s splendid book Australia in 50 Plays is a history of Australian drama is swiftly dispelled by Meyrick in his Introduction: ‘it is about the history of the nation seen through the lens of some of its plays’.

Accordingly, fifty plays written and staged since Federation have been chosen from the Australian drama repertoire after an intense selection process. To ensure varied social, political and cultural representation from an assembled long list of one hundred and twenty plays, Meyrick applied a ‘tri-dimensional professional/cultural/political rubric’. Criteria for assessing the final shortlisted plays included suitability for their future repetition and interpretation and gender balance. There are no one-off dramatic events, few adaptations, and no plays that Meyrick has personally developed or directed.

Meyrick’s impressively broad qualifications in politics, economics, research and the performing arts, his obvious passion for theatre and conversational style writing voice, combine to make an enjoyable, informative, thought-provoking read. A reflection on Australia’s early performance history includes First Nations People and acknowledgement of  the later ‘extraordinary flowering of Indigenous drama in Australia’ over the past twenty-five years.

Rather than categorize the selected plays into their respective genres, Meyrick’s method is to read different plays into each other and into those of earlier periods. He cleverly entwines fifty unique Australian plays written over the past one hundred and twenty years, all varying in content, era-authentic settings and voices, with an observational, often entertaining, chronological overview of the history, politics, culture and economics of Australia’s development as a nation.

The diverse literary smorgasbord of selected Australian plays commences with the early 20th century comedies On Our Selection by Steele Rudd and Louis Esson’s The Time is Ripe. Both plays premiered in 1912, and their contrasting styles, settings and social class of characters reveal insight into Australian rural working class and city upper class life at the time. To avoid giving too much away, but also to whet readerly appetites, this review will mention just a few more of the fifty plays Meyrick uses as a mode of enquiry into collective aspects of Australian life: Brumby Innes (1929), Ned Kelly (1944), The One Day of the Year (1960), Diving For Pearls (1990) and Life After George (2000).

In the final chapter, Meyrick acknowledges the large body of works in Australian drama between 2006 and 2020, and for this period has chosen eight plays with varied authors. Similar to the selected early 20th century plays, the two most recent works reveal a balanced insight into contemporary Australian life, with their contrasting styles, setting and culture. There is Counting and Cracking (2019) the four-generational Australian family story about a Sri Lankan Tamil immigrant family by S. Shakthidharan with Eamon Flack, and Triple X (2020) written by transwoman playwright Glace Chase, which tells of a love story between a New York investment banker and a transgender performance artiste.

If Australia’s development as a nation since Federation has been incremental, so has the publication of books seriously documenting Australian writers and their plays. Leslie Rees writes of the first known attempt to compile a list of local playwrights by W.H. Waters in Harry Emmet’s Theatrical Holiday Book. Published in Melbourne in 1885, sixty-two authors were included, averaging two or three titles apiece, covering a range of twenty years. A London publication, The Dramatic Year Book of 1892, featured a large Australian section, with the anonymous correspondent declaring: ‘There is perhaps no country in the world, where the drama had made such rapid strides and has attained such high standard in so short a period as Australasia.’

Since Federation, significant reference publications documenting Australian drama include Leslie Rees’ two-volume work The History of Australian Drama (1973 and 1978), in which the plays have been selected for their contribution culturally and socially to ‘the emergence of an Australian Idea.’ Companion to Theatre in Australia (1995) edited by Philip Parsons with Victoria Chance, presents a comprehensive reference book presented in an encyclopaedic format, covering theatre in Australia in all its forms since 1788.

In the 21st century, Julian Meyrick brings a new perspective to the history of Australian drama, having discovered after many years of research that Australian theatre history is situated in ‘a broader cultural narrative’. This led to the investigation of other art forms and influences. There is, however, a notable absence of reference to ‘amateur’ theatre in the book. This is surprising, because the early 20th century amateur actor contributed to Australian drama by performing in locally written plays rejected by commercial theatre. Since the 1850s, it is historically documented that hundreds of amateur theatre companies have contributed to their communities by presenting theatre in regional and urban Australia, including donating box-office takings to patriotic causes during two world wars. The terms ‘Repertory’, ‘non-commercial’, ‘Little’, ‘pro-am’ and ‘alternative’ theatre are used in the book to describe early Australian theatre, as well as professional. Perhaps the business-like term ‘non-commercial’ refers to the amateur theatrical arts sector. On the other hand, maybe the term ‘amateur’, meaning ‘for love’ and historically accurate, still needs to overcome a ‘cultural cringe’.

The first two selected plays in the book were written and staged during a time of hope and optimism for most Australians, when uniting the six states strengthened a sense of nationhood. The final two plays emerged at a time when Australian theatre mostly stopped in the 2020-2022 global pandemic. The book itself was admirably conceived, researched, drafted and published during the same pandemic, and coincides with the 50th anniversary of Australian publisher Currency Press.

Congratulations to Julian Meyrick on contributing a new, historically valuable Australian theatre reference book. Australia in 50 Plays also achieves Meyrick’s aim to ‘bring Australian drama into proper consideration of questions concerning the life of the nation. Seeing drama as one of the sinews of public debate on significant issues facing Australia.’

More in this category: « In the Name of Theatre: Book Review Memories of the Neutral Bay Music Hall »
back to top