Written by Gertrude Johnson
In the following article, the founder and director of the National Theatre Movement, GERTRUDE JOHNSON, tells the story of how it began, its growth, and its hopes for the future. This is a transcript of an article that appeared in Adelaide Advertiser in May 1953 to co-incide with the launch of the National Theatre's Coronation Festival Opera Season in South Australia. 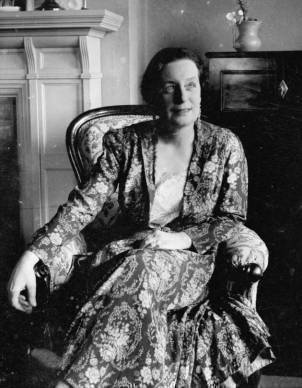 I have been asked to state what inspired me to found this movement, and I must say that the original inspiration came to me during the last opera performance of Dame Nellie Melba. Dame Nellie had already sung her farewell at Covent Garden when Lillian Bayliss, of the Old Vic, asked her to sing just once more for the funds of the Sadler’s Wells Theatre, then being built. Melba agreed to give a presentation of La Bohème with an all-Australian cast, including John Brownlee, Browning Mummery, Frederick Collier and myself. During that association one saw what wonderful opportunities the Old Vic was offering young artists, and I remarked to John Brownlee that there should be an Old Vic in every State of Australia, all combining to form a truly national theatre. John laughed and agreed that it was a grand idea, but asked who was to get the thing started?

Sadler's Wells having been built, those who assisted in the raising of funds were invited to a performance of The Snow Maiden. A young South Australian singer by the name of Olive Dyer sang the leading role on this occasion, and the thought came to me again, that opportunities such as these should be given to young Australians in their own country. I made a firm resolution that should I ever return to Australia, I would press the cause of an institution similar in function to the Old Vic.

Three years later I was recalled to Australia for family reasons, and at a luncheon given in my honour, the opportunity arrived to voice the need of an Australian national theatre.

Fortunately the guests present were all very interested in the cultural development of the State, and the idea had an enthusiastic reception. An initial meeting was held in November 1935, and at a later meeting in February 1936, a constitution was passed.

As it was to be a people’s movement, some bright soul suggested a nominal membership fee of 1/ and £8 was collected at our first meeting. This sum opened our banking account, and in a short time we had a large enrolment of members. How ever, we soon found that the 1/ membership fee was not a good idea, the amount hardly covering the cost of postage and printing, so that suggestion was eventually dropped. It was essential to secure a regular income, and we devised a plan enabling subscribers to the movement to see eight productions a year in return for an annual membership fee. This meant, of course, that we had to have a theatre of our own to present a continuity of productions, and by good fortune we were able to rent St. Peter’s Hall, East Melbourne. This building, which became the first Australian national theatre, and is still the headquarters of our movement, has an auditorium seating 350, and rooms for studios, offices and wardrobe. We have seen great progress made in this little theatre. 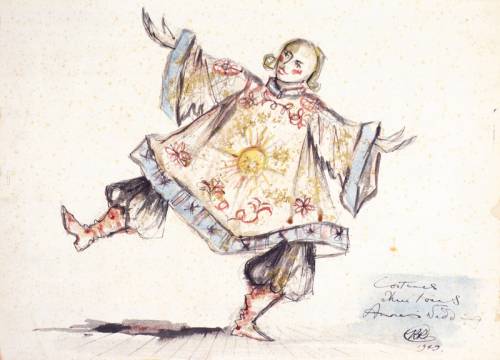 Costume design by Kenneth Rowell for the Three Ivans in Aurora’s Wedding, 1949 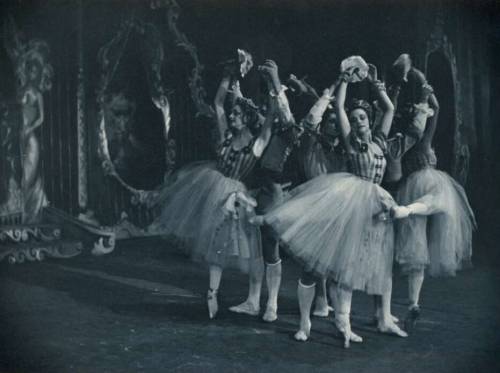 During the period 1936–39, Mr. William P. Carr joined us as director of productions, and Miss Jean Alexander founded our ballet school. We soon had the three schools of opera, ballet and drama well established, and were able to demonstrate to the public that we were capable of producing the three arts, in addition to such theatrical presentations as pageants. Before the war most of our big productions were presented at the Princess Theatre, but with the advent of hostilities, this theatre was given over to films, and we had to be content to work in our little theatre at East Melbourne. Until then everything had been progressing wonderfully, but the effects of war threatened to destroy all our work of the past few years. Petrol rationing and black-outs caused us to lose a great number of subscribers, and at one time we thought it would be impossible for us to continue. But a good friend. Dr. Rowden White, the great educationist had been watching our struggle for survival, and he came to our financial aid. His help enabled us to carry on, and we set out to assist various war charities, eventually raising £16,000 for them. This work brought us a number of new friends who were to help us further our aims.

Our next big opportunity came in 1947, when the Princess Theatre became available once more for theatrical productions, and I was able to persuade our president, Sir Robert Knox, to launch our first festival of opera. Melbourne had not seen a professional production of opera in years and the response to our project was most gratifying, a profit of £2,000 being made on this season. Thus encouraged, we decided that our future festivals would feature the three arts. Our first professional ballet company was formed, and Kenneth Rowell was engaged to design the decor of Aurora’s Wedding and Romantic Suite. These two ballets created a great impression, and the 1948 festival brought us the approval of the Victorian State Government in the form of a State subsidy. This subsidy has enabled us to greatly raise our standard of production and is a practical form of help for which we are most grateful. 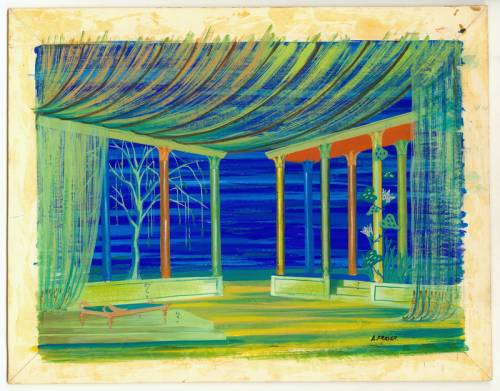 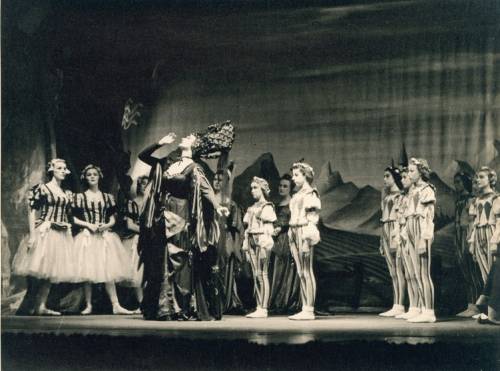 Scene from Swan Lake, with Joyce Graeme as The Queen Mother, 1951

In 1951, we were entrusted with the Centenary of Victoria State Government festival, and we felt that the time had arrived for us to carry out the full aims of our movement. Our desire has always been to bring our famous artists back to Australia at the height of their careers so that they could be seen and heard by their fellow countrymen, and with the aid of the Australian Broadcasting Commission, we were able to present Marjorie Lawrence singing the role of Amneris in our 1951 presentation of Aida.

It was a wonderful opportunity for our talented young singers, who gained immeasurably from the experience of working with this world-famous star. The support of the ABC Orchestra, under the direction of Joseph Post, was in this, as in other festivals, of the utmost value. That year also provided us with two ballet successes, John Anthill’s Corroboree, with choreography by Rex Reid (a young Adelaide dancer who has since proved his worth overseas) and the first Australian production of the full four-act ballet, Swan Lake. This was reproduced by Joyce Graeme, with décor by Anne Church, and conducted by Verdon Williams with the 3DB Orchestra. These two ballets were chosen to tour the Commonwealth to celebrate the Jubilee, and were later taken to New Zealand. 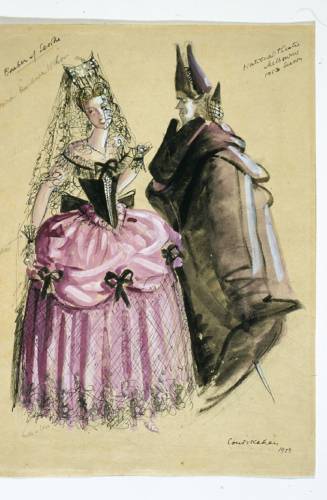 Costume design by Louis Kahan for Rosina in The Barber of Seville, 1953 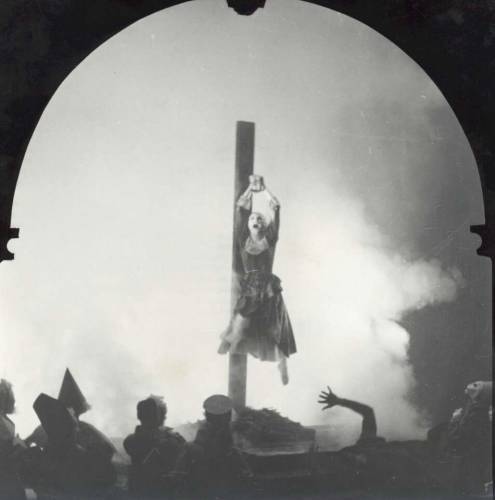 John Brownlee was our guest opera star for the 1952 festival. He sang the title role in Don Giovanni and appeared as Scarpia in Tosca. It was the first time Australia had the opportunity of seeing this artist in opera, and he created a very fine impression. Walter Gore and Paula Hinton were our guest artistes for the ballet, and they brought to us Walter Gore’s ballets, Antonia, Crucifixion, and Theme and Variations. We had been honoured with a proposed Command Performance for this season, but owing to the death of His Majesty King George VI., this was cancelled when the Queen was forced to postpone her Australian tour. However, I am happy to say that this great honour has been bestowed on us for March 1, next year, during the 1954 Royal Tour, and we look forward to presenting a programme worthy of this historic occasion.

We are very proud of the list of young artists our movement has developed. John Lanigan and John Cameron have both had signal success at Covent Garden, and Eleanor Houston, dramatic soprano, now singing with the Sadler's Well’s Company, has been hailed as one of the finest sopranos in England today. Max Cohen and Laurence Lott are two baritones who are doing very well in London, and Betna Pontin, a fine lyric soprano, has greatly impressed critics in Vienna. Lynn Golding, ballerina, created a very satisfactory impression when she danced in London recently, and Max Collis, male dancer, received much praise for his performance as Petrouchka. Adelaide’s young tenor, Kevin Miller, had a sensational success when he appeared in Melbourne as the Count in The Barber of Seville. Another young Adelaide tenor is proving himself to be a very fine Puccini singer, and I feel that Adelaide will be delighted with the young artists appearing in the forthcoming opera season.

Our hopes for the future are that each State will form a branch of the National Theatre Movement, and that a Federal Council well be set up to establish three interstate companies of opera, ballet and drama.

These will tour the Commonwealth annually, thus providing our best Australian artists with permanent work. We also desire that each State will have its own school for the three arts, developing and encouraging Australian artists who will enrich the culture of our land. I am happy to say South Australia is the first State to affiliate with our movement.

More in this category: « Walter Kirby: Australia’s forgotten Caruso (Part 4) Sara Flower: A flower from the north »
back to top