E.I. Cole and the Haymarket Hippodrome

Written by Les Tod
Not to be confused with Wirth’s Hippodrome on the site of today's Capitol Theatre, the Haymarket Hippodrome, also in Hay Street, opened in Sydney in 1905 under the direction of flamboyant showman E.I. Cole. The venue for wild west dramas and other tales of frontier life, LES TOD explores the history of Cole’s extraordinary tent theatre. 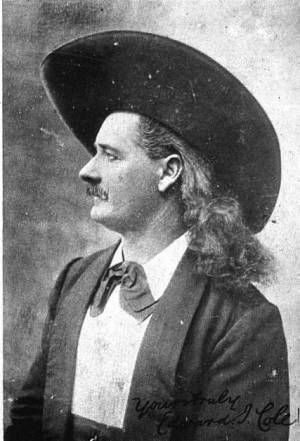 The haymarket hippodrome opened on Saturday night, 4 November 1905.1 The first show was Dick Turpin, which ran for a week before being followed by a wild west show, On The Trail, the story of Custer’s Last Stand.

The theatre was actually a tent type show, started by E.I. Cole and his Bohemian Dramatic Company, renowned for its melodrama and wild west shows based on those of Buffalo Bill in the US. The company was founded by Edward Irham Cole, born in London around 1860 and came to Australia when he was about 12. For a time he teamed with an act ‘Texas Jack’ and his Wild West Dramatic Company. He also took over the lease of the Victoria Theatre in Parramatta in the 1890s.2

The Hippodrome held up to 3000 persons. He left his brother-in-law in charge while he set up a second tent Hippodrome in Melbourne.

A critic who wrote in The Bulletin recorded of the Haymarket Hippodrome:

Out of George-street into Hay-street; drop at once into one of the most unlovely parts of Sydney, and in a hundred years you come to the vast tent in which The People’s Theatre is housed … The ushering arrangements are simple; you help yourself. Away back in the dim distance rise the sixpenny planks, tier on tier. In the middle of the stalls, forms; flanking them, more tiers. The planks are best; and you can bring a cushion yourself … The band bursts in and turns itself into an orchestra; and up and down … moves the ‘boss’, his black hair flowing down his back; on his head 3ft of hat; in his hand his badge of authority, a whip with a whistle in the handle. He blows the whistle and up creeps the curtain.3

E.W. O’Sullivan, a member of the NSW Legislative Assembly, claimed to have been the first politician to climb Mount Kosciusko. He remembered the event in his play, Coo-ee, which opened at the Haymarket Hippodrome on 14 April 1906.

For the prologue, set on top of Kosciusko, the stage in the Hippodrome tent theatre of E.I. Cole’s Bohemian Dramatic Company included raised mountain ridges, which had to carry real ‘naked horses’ in a chase after brumbies similar to that immortalised in The Man From Snowy River.4

The Newtown Chronicle reported on 4 August 1906 that it was nearly a year since Mr Cole established his show at the Hippodrome in Hay Street. On 3 November 1906 the theatre was described as having a canvas canopy, was well ventilated and was one of the most comfortable theatres in Sydney. This description contradicts that of The Bulletin critic, above.5

On 5 October 1907 it was announced that ‘during the past week Mr E.I. Cole has had the Haymarket Hippodrome renovated and improved, and this evening it will be reopened under the management of Mr J.S. Phelan and Son, who will present many thousand feet of the latest films … there will be a matinee on Monday.’6 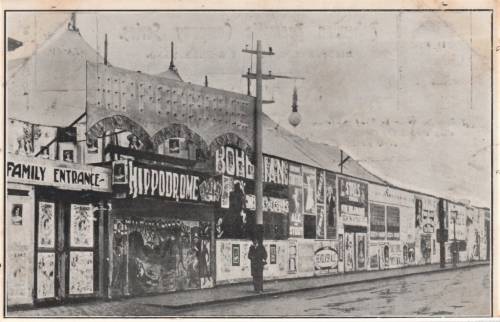 Advertising card for Cole’s Bohemian Dramatic Company, showing a scene from one of his plays, 1905

On 7 October 1907, it was reported ‘a large attendance witnessed the opening display at the Haymarket Hippodrome on Saturday night [5 October] of Messrs J.B. Phelan and Son’s electric biograph. The pictures were splendidly shown, and provided excellent entertainment. There will be a matinee this afternoon.’7 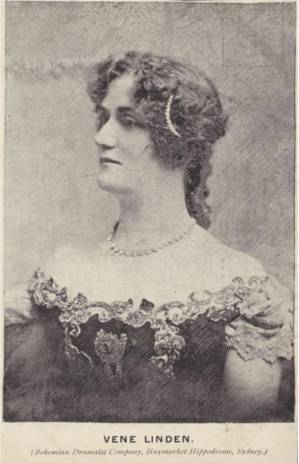 However, by 1909, advertising for his shows seems to peter out.

The Haymarket Hippodrome was not on the site of the later Wirth’s Hippodrome, even though both were in the same street, as some writers have assumed. Nor was it on the site of Anderson’s Olympia Theatre, which was on the corner of Hay Street, Campbell and Elizabeth Streets.

However, from 1910 onwards, the issues do not show Cole at all, nor his show. Instead the site is replaced by vegetable markets.11

In 1916 the disused Belmore Markets, between Hay and Campbell Streets, were dismantled and re-erected as Wirth’s Hippodrome and the Manning Building. Wirth’s Hippodrome was later converted to the Capitol Theatre, a lavish picture palace of the late 1920s.

4. Richard Fotheringham, ‘Coo-ee’, in Companion to Theatre in Australia, p.158

More in this category: « Bert Levy: Australia's first global vaudeville star Stephen Sondheim and the Australian Connection to His Work »
back to top