From Kiddie Stars to British (Not Very) Blondes: the Arnot sisters

Written by Kurt Gänzl
A chance find on eBay prompted KURT GÄNZL to take another look at Jennie and Louise Arnot, two sisters who spent some time in Australia as members of Marsh’s Juvenile Comedians in the 1860s. 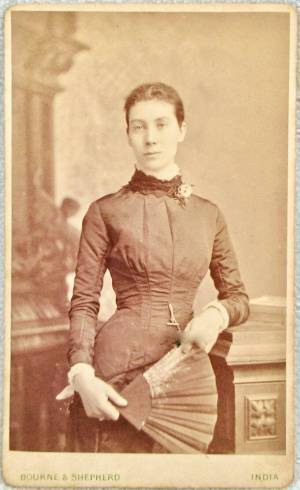 The brain of my computer is bulging with Stuff. Unfinished and abandoned books and projects, sketched articles and fun research going back to the days before computers were invented. Many, many thousands of pages of diggings from closed-down mines.

My own brain, happily and however, is still sufficiently functional to remember vaguely what is stored away in the tailings of my working life, and sometimes and for some reason I go back and quarry in one heap or another. Today was one such.

Amongst a pile of non-theatrical Victorian cartes de visite, I came upon one labelled ‘Jeannie Arnot’. Photographed in India. The brain went ‘click’ ...

Some years ago, I researched and half-wrote a little book on the Lydia Thompson ‘British Blondes’. Then I was asked to do a piece for a learned Franco-German journal, so I gutted my Blondes book and published its heart of some 30 pages. The left-overs still sit amongst those tailings, and they include a biographical sketch of ‘Miss Jennie Arnot’ and her sister Lou. So I snipped out the section, updated it, and here it is, twinned with its relevant photo.

Talking about the American girls who joined the Thompson troupe:

Amongst the newcomers were two American sisters. Amazing how often there were sisters …

This pair were a somewhat better bargain than the multiple Logans, and they had been in show business with some success since an early age. They called themselves Louise and Jennie Arnot, but their real name was McLaughlin and they had begun their theatrical careers in the 1850s as members of the Marsh Children’s Comedians troupe ‘every one under 13 years of age’. Louise, who was with the company from 1854, latterly wasn’t under 13, but ‘Little Jenny Arnot[t]’, who seems to have joined up in 1859, was. In the 1860 census, when the troupe is playing Nevada, she is listed as 8 years old to Louise’s 15. Tut! Her date of birth was 11 July 1850.

Well, they were born in Rochester, NY, the daughters of and Irish boatman by name John McLaughlin and his wife Mary Jane. The McLaughlins were trusting parents, for their daughters traipsed off, in the care of Mr. and Mrs. Marsh, not only to New Orleans, Nevada and San Francisco—where Louisa played leading lady, from burlesque princes to Lady Macbeth, opposite the Marsh’s hugely puffed young son—but thence to Australia and New Zealand, where they stayed for a number of years.

The troupe of children, the ‘Arnot’ girls at their head, was highly successful, but Mrs. Marsh proved less than efficient as a duenna. In 1863, Louise climbed down an alleged knotted sheet, provided by her little companions, into a carriage occupied by a handsome star wire-walker, and zoomed off to get married. The wire-walker and all-round acrobat was a man of some notoriety who called himself ‘Henri (or Henry) Bartine’. The Australian records tell us he was actually named Mahan[y] or something approximating that, and that he couldn’t decide whether he was English or American. I see he actually arrived in Australia (‘equestrian’ ‘aged 24’) along with the Stoneham family, travelling steerage, in 1862. The previous year he had been, for three weeks, a 2nd Lieutenant in the New York Infantry. And I do see a record for a Henry Mahan and a Mary S. McLaughlin getting wed in Sydney in 1863. I think that might be Mary L.

Anyway, Henry and Louise had a daughter, Jennie Mahany (b. Fitzroy, 18 February 1864), and a son, Henry James ?Mahony Bartine (1865), who died aged one, before Henry apparently caught Louise in a seeming infidelity, whacked her, and she fled, in 1868, to a ship which was heading back to America. Bartine had her luggage unloaded, Louise went to court and got it reloaded … End of marital chapter, but not of her career. 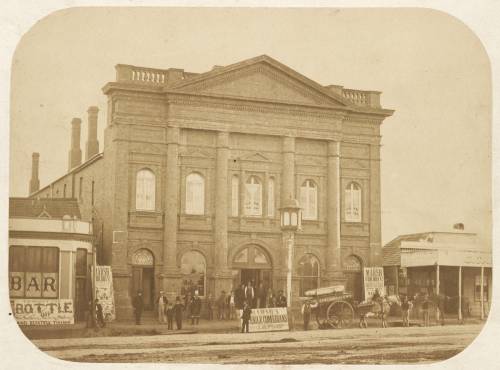 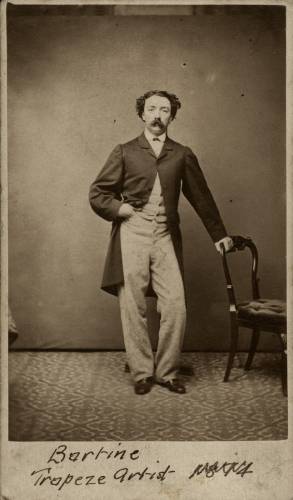 Henri (or Henry) Bartine, wire-walker and acrobat, c.1864. Photo by A. McDonald.

‘Little’ Jennie apparently stuck with Louise, and we are told that she, too, acquired a brief Australian husband before they finally did quit the country. By 1869, they were back in San Francisco with the forgiving Mr. Marsh and his son and the latest version of the troupe. By the 1870 census, the two siblings, all husbands shed, can be seen in New York: Miss Louise Arnot (26) and daughter Miss Jennie scribble (6), plus Miss Jennie Arnot (20) and Mary Arnot (48), who I guess was mother. Doesn’t quite tally with the Nevada ages, but I guess when you are a member of a kiddie troupe you chop years off your age, and when you are a teenaged once-married mother you might add some on.

And their adult careers are about to begin. It is 1870 when I spot the two girls joining up with the Lydia Thompson troupe. Louise had been a leading lady with Marsh and in Australia, but as a full-blown performer she had to retreat to supporting roles behind somebody such as the Queen of Burlesque. Jennie had specialised in sprightly soubrette parts both in the juvenile troupe and, from her early teens, with such as Emily Jordan in burlesque: she carried right on playing the same sort of parts with the best burlesque troupe in the country. For both girls were decidedly useful. Marsh’s training had covered all aspects of theatre: acting, singing, dancing. The fine-looking Arnot girls could play in the burlesques, in the supporting comedies, sing and or dance solos, and Louise, with her strangely ‘mannish’ and deep voice was a natural for pants parts. 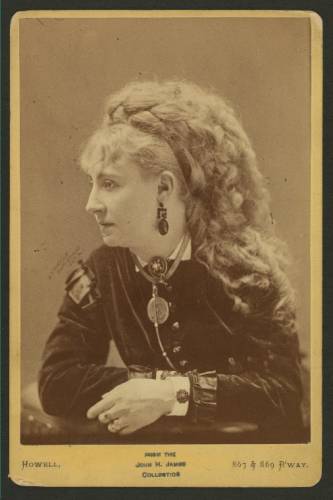 Lydia Thompson in the 1870s. Photo by Howell, New York. The troupe opened at Wood’s Museum, with Jennie cast as Cupid in Paris, Ochobrand in The Forty Thieves, and Brunette in St George and the Dragon, before heading out on the road.

In January 1871 the company presented Paris, Sindbad, Richard III or Bad Dickey and Lurline at New Orleans. Behind Eliza, Lizzie Kelsey, Minnie Walton and Kate Heathcote, Louise took the part of the heroine’s attendant, Wavelet, originally played by pretty Nellie Hope, but since by none other than Willie Edouin in travesty. ‘She is justly becoming a great favourite with our people’ commented the local press. She played William in Black-Eyed Susan and five characters in In and out of Place, appeared as the Sultan in Sindbad and Jupiter in Paris, and later took up the part of the Count to Jennie’s Lady Una in Lurline as the company went through its usual changes of personnel. She ‘possesses the happy facility of doing everything she touches well’ agreed the newspapers.

‘The captivating’ Jennie played in the afterpieces, supporting Lydia in A Day in Paris. The tour ended in June, and so did the Arnot girls’ time as Blondes. Lydia and her husband headed to England to stock up on ‘real’ British blondes, and the girls moved onwards to the next part of their long career.

That was where my original piece stopped. But not my curiosity. So when the photo of Jennie surfaced on eBay, I reactivated my search for the whatever happened to of the Arnot girls. 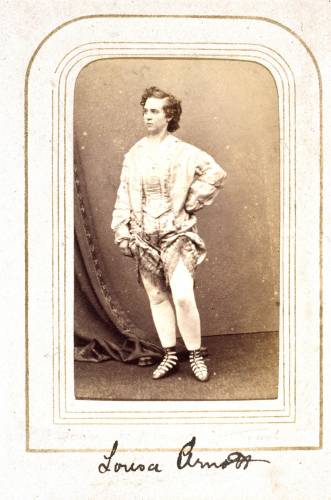 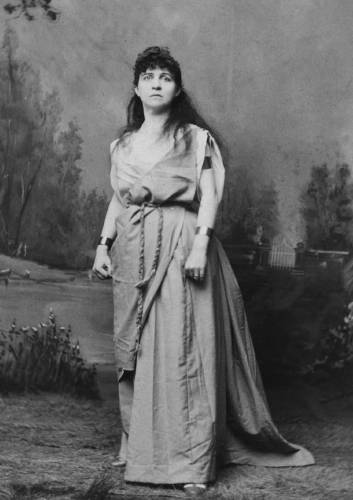 Louise quickly found a new husband. Quite when and where she acquired him I haven’t yet tracked down, but in February 1870, already, the Clipper states that she is the wife of John Wilson, a well-known Scots circus proprietor. Even though Tony Pastor seems to have continued to bill her as ‘Louise Bartine’. Wilson died in Hamburg in 1876, and Louise subsequently became Mrs. Thomas Patrick Gunn, wife of her much younger partner in her vaudeville sketches and sometime ‘stage director of the Lafayette Theatre’.

I have also found a marriage listing for 10 May 1920 for Thomas P. Gunn and Jane Rasmussen! Marriage with deceased wife’s daughter??? Well, she was nevertheless, a decade older than he.

After her putative divorce from her mysterious Australian husband, Jennie married the actor, Davenport Bebus (b. 1848; d. NYC, 10 July 1897). Bebus was a gambler, convinced he could break the bookmakers’ bank, and when his losses got too great, he threw himself terminally into the North River at 81st Street ...  he was buried by the Actors' Fund. There were a daughter, Edith (b. NYC, 6 January 1887; d. Dunellen, 1960, Mrs. Schaefer) and a son Davenport (b. NYC, 2 October 1888; d. Bridgewater, NJ, 1959), from the marriage. Jennie Elizabeth Bebus aged 65 can be seen in the 1915 census of New York living in Church Avenue, Kings, listed as ‘mother’ of either one L.P. Kerr or his wife Daisy. Odd. In 1920 she’s in Franklin, NJ, then, till 1931, in Dunellen, Plainfield NJ where she died in the April at the age of 81.

Well, that’s the facts and figures all tied up pretty neatly. Both girls had plenty more career after their spell as Lydia Thompson satellites, but little to match those glory days. Louise was touring the vaudeville circuits with a company in sketches (Fun on the Bristol, Coon Hollow, Regan’s Luck, My Friend from India) up till 1907 and her sixties. Jennie seems to have retired in the 1880s after her (re-?) marriage and motherhood.

Before the Legislature begins its labors, I will just mention that the Marsh Troupe will perform in Virginia to-morrow night (Thursday)—at the Opera House of course—for the benefit of Engine Company No. 2. They played here last night—Toodles, you know. Young George Marsh—whose theatrical costumes are ungainly enough, but not funny—took the part of Toodles, and performed it well - performed it as only cultivated talent, or genius, or which you please, or both, could enable him to do it. Little Jenny Arnot (she with the hideous—I mean affected—voice) appeared as Mrs. Toodles. Jenny is pretty—very pretty; but by the usual sign, common to all those of her sex similarly gifted, I perceive she knows it. Therefore, let us not speak of it. Jenny is smart - but she knows that too, and I grant you it is natural that she should. And behold you, when she does forget herself and make use of her own natural voice, and drop her borrowed one, it is the pleasantest thing in life to see her play.

More in this category: « The Memoirs of J. Alan Kenyon or Behind the Velvet Curtain Theodosia Yates and the ‘Great Yates’ »
back to top