Director, choreographer and lecturer Robert Ray is passionate about G&S, and since 2007 has been involved in mounting productions at the annual G&S Festival at Harrogate in England. Robert was a guest speaker at The Channel in July 2018 and THA now has the pleasure of welcoming him to the Committee. 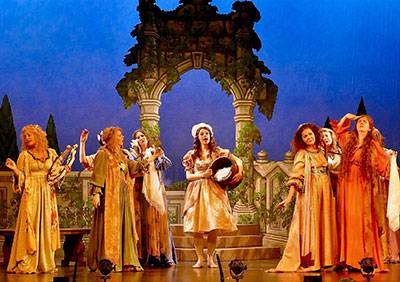 Pre-Raphaelite group - Beginning of Act 2With the disbandment of the D’Oyly Carte Opera Company in the early 1980s, father and son Ian and Neil Smith decided to do something about it. Something to keep the flame alive, something to keep these masterpieces of English light opera before the public. They started a Festival in Buxton, Derbyshire in 1993, at the Frank Matcham designed Buxton Opera House.

As well as establishing a small professional company, The Gilbert & Sullivan Opera Company, they invited participants from all over the world. It was a roaring success. In 2007 and 2011 Gilbert & Sullivan Opera Victoria participated. Both times we took our own sets and costumes, and still made money! (Mainly from generous donations and fundraising). We took Patience first in 2007 and then The Yeomen of the Guard and The Arcadians in 2011. A competition between the non-professional groups was established, with an adjudicator giving an on-the-spot evaluation of the performance in front of the final curtain. For Patience we came third, and our soprano, Stephanie Gibson, won Best Female Voice for Yeomen. The Arcadians wasn’t adjudicated, but declared the “hit of the Festival” by Neil Smith. 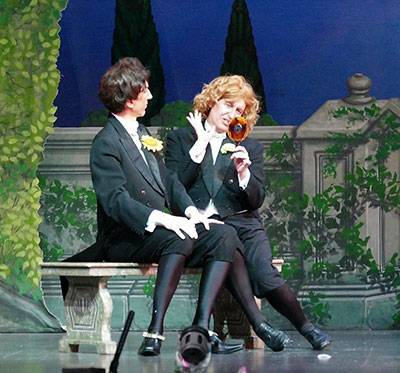 Since then, they have mounted a production at the Festival every year. It has now performed the entire canon, including Thespis. The only company to do so. Our own Diana Burleigh has played a major part in the SavoyNet shows. She has directed The Sorcerer, The Gondoliers, Iolanthe, Princess Ida, Utopia Limited, and her The Yeomen of the Guard won many awards, including Best Director for Diana, and as International Champions that year. Bravo!

In 2014, after a dispute with the local council, and one councillor in particular - there is always one - the Festival moved to the larger North Yorkshire city of Harrogate. Instead of an Opera House, there was the Frank Matcham Royal Hall, (it had been originally called The Kursaal - but anglicised after the war in 1918). Mainly built as a recital or dance hall, it is still a magnificent interior, which has been fully restored. Nellie Melba, Sarah Bernhardt, Clara Butt, and the Beatles,  have all performed there. William RemmersThe way SavoyNet works is thus: The Director and Musical Director (MD) are chosen from a wide field of applications from around the world. Once they are appointed, they call for auditions, which were once made as DVDs, but now are posted privately on YouTube. Once it is cast, the Director usually sends out the moves on paper, although some choose to do it all on the spot. There are only 7-8 days to rehearse and get the show on. Likewise, the MD sends around links to rehearsal midi files. Everyone must arrive off-book. Costumes are hired locally, and Paul Lazell, a gifted scene painter, has a set of sets for all the operas.

In 2006, I directed Ruddygore, which was a re-production of the original opening night version of 1887. After that Gilbert and Sullivan made many cuts and alterations, including changing the racy title to Ruddigore. On a very hot night in August 2006, the experiment was a part failure. The lengthy and rather aimless second act seemed interminable. Not for nothing did Gilbert and Sullivan trim it. For once, Gilbert’s expert sense of construction failed him, as the second act is clumsy and uneven. The hastily revised version is better, but still not a patch with the best of them.

After a few knock-backs I was chosen to direct Patience this year, with one of my old ghosts from Ruddygore, Eric Peterson as MD. A wonderful partnership as it turned out. I had directed Patience twice before for Gilbert & Sullivan Opera Victoria, and remember I took it to Buxton. I think it one of their best works, and it plays beautifully in performance. It was then cast, with some very exciting talent, including a 6’7” tall William Remmers as Archibald Grosvenor. Hiring costumes can be a bit of a hit or miss experience, so I decided to ask for the loan of GSOV’s costumes, which I had worked on with Janice and Shona Donnelly in 2006. I brought them home to Sassafras, and over an 8 month period refurbished and re-designed them. I bought an overlocker, and extended my very modest costume making skills. I also made most of the hats. I had such fun. 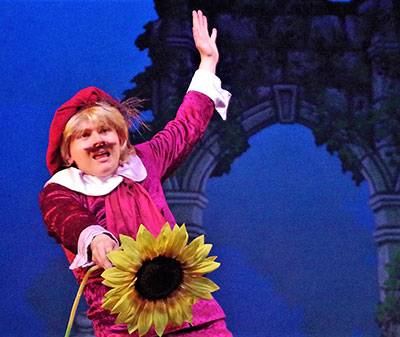 Alexander Conway (The Duke)I wrote out all the moves, and sent all the choreography via private YouTube videos. Had to figure out how to get 20+ costumes at a minimum cost. Decided with an allowance of four suitcases (my partner Brian came with me), to bring them on the plane with us. Some of Gilbert & Sullivan Opera Victoria ladies were also cast, and each carried two dresses. Hats and some props were mailed by Australia Post. I did all the preparation I could before leaving for the UK.

Music rehearsals started on 8 August, continued on the 9th, and I started the stage direction on the 10th. We would perform on the 16th, so I really had to have my skates on. Knowing what I was doing was a big help - no time to improvise or try a few different versions. Rehearsals, while very stressful, went smoothly and happily. Everyone pulled their weight, with only one or two of the men being severely challenged figuring out which was their left and which was their right. “No, no your other left foot” I would helpfully say.  (In true military fashion I made sure they started every move with their left foot. But that was too complicated for some. Sigh).

The rapturous maidens had their dresses to rehearse in, which as they had long trains was a big plus. They moved beautifully. Why are women so much better at this than men? The other costumes were hired, although I made Grosvenor’s vests, and Bunthorne’s big bow tie. On the day of the performance, Paul Lazell and the crew had the set up by 10 am - a record. We could place a few of the numbers in the break. Then Dress Rehearsal at 2:30, which went surprisingly well, although the projection of the Pre-Raphaelite paintings during the overture presented some problems which were never really resolved. A short meal break, and then we were on! 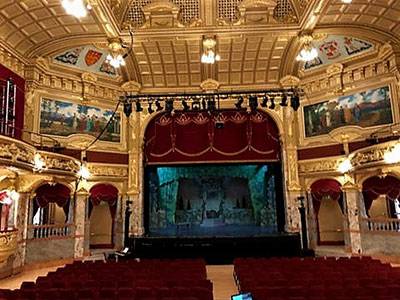 Interior of the Royal Hall, Harrogate, set up for PatienceThe one and only performance went very well. While I always try to stick to what G&S had in mind originally I hoped there were enough innovations, and new ideas,  to keep the audience happy. It seems there were. At the fall of the Act 1 curtain, the applause and cheers were thunderous. Unlike Act 2 of Ruddygore the Act 2 of Patience runs like the clappers. One show stopper after another. The tradition of a SavoyNet show is the cast all conceal the flags of their countries, and pop them out and wave them during the curtain calls. Always an impressive sight - to know so many have come near and far to make this happen. The audience was ecstatic. What do they say about the sound of applause?

The adjudication by Tony Finnegan was extremely complimentary and positive. He paid me the enormous compliment that if Gilbert had been still alive, this is the sort of innovative production he would have staged. There was nothing but praise for Eric’s Musical Direction, and for all the artists. He called tall William Remmers’ Grosvenor “a tour de force”. There was not one negative in his adjudication. In other words: quite a rave review.

As we were at the half way mark of the Festival, it would be another week and a half before the Awards were announced. I didn’t stay around, naturally, but went to see a city I have longed to see all my life: Copenhagen. I wasn’t disappointed. Coming back to Australia through Heathrow, I was alerted that the Awards Ceremony was being broadcast on FaceTime. After grappling with   the dodgy reception on my iPhone, and trying to hear in a very noisy Heathrow, I was over the moon to hear that “Patience” had won the Best Production Award, and was declared the International Champions! It was also awarded Best Traditional Production, and I also won for Best Costumes. Eric won for best MD, and there were awards for William Remmers, Angela Lowe (Lady Jane), and Best Duet (“Long Years Ago”). The most nominations and awards of any SavoyNet show! What a thrilling and really unexpected end to a very memorable experience.

I didn’t see much of the spa town of Harrogate, alas. But what I did see charmed me very much. The nearby town of Knaresborough is one of the prettiest places I have every seen on this planet. I expected North Yorkshire to be all rather Wuthering Heights. But far from it. The rolling hills, the green countryside, the large open park in Harrogate called The Stray, the charming sandstone Victorian buildings, many of them curved around crescents, and the friendliness of the people, ensures I will go back. Hopefully if and when I get picked again to direct another SavoyNet show.

More in this category: « Roxy Parramatta
back to top