When the J. C. Williamson conglomerate finally came to an end in 1976 - its theatres sold and its name leased - it became obvious that almost a century's worth of the company's existence must find a repository. Where was all this material - from rooms behind Melbourne's Her Majesty's and offices in the Comedy Theatre - to go? The photographs, programmes, music scores, magazines, documents, set and costume designs, props, scrap-books, etc. etc.?

In 1978, eventually, the National Library of Australia purchased, from JCW's Sydney offices, an enormous selection; two years later thousands of documents were recovered and donated to the Performing Arts Museum (now Performing Arts Collection) by Lady Tait, widow of Sir Frank (the last of the five brothers who had managed JCW from the 1930s through to the 1960s); the State Library of Victoria also obtained items, and some material found its way to skips positioned behind Her Majesty's. THA members at Scenic Studios May 2013 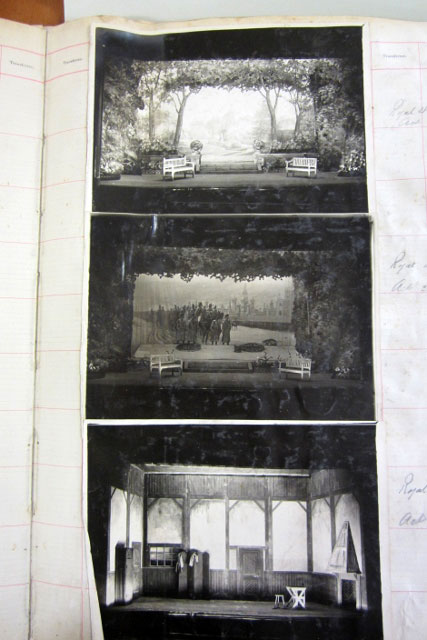 Sets from Melbourne production of A Royal Divorce by W.G. WillsBut back in 1974, JCW's Head of Scenic Art, Ross Turner, had only just recently taken on Paul Kathner, a scenic artist and designer of many years' experience. At the demise of the company, "The Firm", it seemed only natural for the two of them to form a partnership and to create a company of their own - Scenic Studios - a company that exists to this day (and is still in great demand), albeit minus the officially retired Paul Kathner. It was also only natural that Ross and Paul should save several old ledgers or volumes comprising thousands of photographs - records of JCW sets, backdrops, scenic details, lighting rigs and so on - for reference purposes in their new venture. Ross was concerned that these ledgers survived because they contained so much scenic art history.

All in all, there were seven volumes, in varying shapes and sizes, covering the first twenty to thirty years of the 20th century. In addition there were three smaller albums with significant London origins and connections. Since the actual volumes themselves - not the majority of the contents - mostly date from the late 19th century, it is not so surprising that their condition was not exactly pristine, although the photographs within had not been affected by time or by use. Ross and the studio have continued to use the contents of the ledgers as a working reference for painting techniques that might otherwise have been lost. Judy and Delia preparing to bubble wrap a volume

It is these wonderful books that a group of us first laid eyes upon a couple of years ago out at Scenic Studios' premises in Fink Street, Preston. (See On Stage article - Scenic Studios Members' Tour, May 7, 2013)

Enter Peter Johnson, THA president and also a key figure in the St. Kilda Historical Society. Having successfully secured a local history grant from the Public Records Office of Victoria to digitise that Society's important collection of photos and documents from the Espy Hotel  Campaign, he felt it was only appropriate that we, THA, should attempt something similar in relation to Scenic Studios' unique collection of scene books.

To cut a very long story short, a group of us, Dr. Mimi Colligan, Elisabeth Kumm, Delia Taylor and myself, arranged visits to study the books in situ, to research as much as we could where and when we could, and to start to assemble a submission - by November 10 last year - to the PROV, the decision to be made public by June this year. Mimi duly completed and submitted the long and complex grant application - along with wonderful references from Frank Van Straten, OAM, Tim Fisher (Senior Curator, Arts Centre Melbourne), and Adjunct Professor John Rickard (Historian, Monash University) - and we sat back and waited, moved onto other matters, never quite forgetting.... And in the last week of May - success! We could proceed. What was jokingly referred to as the 'Great Scenic Books Heist' occurred early in June - the books swaddled in bubble-wrap and transported to AMS Imaging in South Melbourne.

The process involves the scanning of well over 2000 pages of photographs, floor-plans and sketches. Once the material has been returned to us, Peter will process the images - this involves seven stages over several months, during which much research and writing will be taking place by the rest of "the team". Ultimately, the aim of the project is to digitise each page and make high resolution images available, with descriptions attached, to students and teachers of theatre and media studies, theatre historians, writers and artists, scenic designers, directors and others, via the internet, on a free facility, such as Flickr.
Watch this space - but, obviously, not just yet!