Memories of Evan Hercules and the VTT

Written by Phil A’Vard
In 1994, Evan Hercules arrived in Melbourne from London. An Australian by birth, Evan had been living in England since the 1960s, but he was passionate about theatre in his home state of Victoria and intent on founding a theatre organisation modelled on the London Theatres’ Trust. The main objective of the group would be the preservation and promotion of theatre in Melbourne and country Victoria. And to this end, Evan set about contacting anyone who he thought might be interested in joining his crusade. In this, the first in a series of articles celebrating the 25th Anniversary of Theatre Heritage Australia, Phil A’Vard, begins the story by recounting his first meeting with Evan.

“Phil! There’s a Set Designer on the ‘phone who wants to speak to you urgently”, Natalie, my secretary called from the outer office of the Alexander Theatre. “He wants to see you this afternoon.” Evan and Mogg on a Melbourne tram.
Courtesy of the Abi & Fabian Hercules. “What about?” I replied. “He’s talking about something he calls a ‘Theatre Trust’ like they have in the UK”.

There was nothing in my diary for the afternoon and, following the advice of the late Kenn Brodziak who once stated that your next big show could walk through your door at any minute, I let Nat set up a time.

That afternoon, Evan Hercules came into my life …

Evan’s story was that he had been designing sets for theatres in Australia but developed his career further by moving to England. He was aware of the Alexander’s reputation in the business and been told that I would be a person who could help him. It also seemed that there was a connection between us in that his wife and I had attended the same college some years earlier.

After the introductory chat he set out the reason for his visit. He had considerable involvement with a London-based ‘Theatre’s Trust’, an organisation set up to preserve the theatres of England and to keep them in operation, even to the extent of purchasing them for renovation. This ‘Trust’ consisted of well-connected people in a position to influence governments and planning authorities of the need to protect artistic heritage. Seemingly they had achieved many of their objects and now owned at least one theatre building in London.

He was concerned that two major mainstream theatres in Melbourne were under threat of development and firmly believed that a body with similar objectives to the English ‘Trust’ would be necessary to ensure the retention of these and other items of what called ‘our theatre stock’.

(Here I must hang my head in shame for not long before I had reported adversely on the suitability of the then derelict ‘Regent Cinema’ for theatre and ballet presentations).

We both agreed that the success of any body of this nature would, like the UK model, have to contain and be headed by eminent persons and require, as well as influence, considerable funds.

Little did I know that Evan was a man who, once started on a project, would turn into human dynamo!

In a matter of days he was on the telephone demanding my presence at a meeting at the offices of the National Trust.

Evan has been hard at work assembling nucleus of people who he thought would be useful in his project. Among the attendees were Rohan Storey of the National Trust; the late Ivan Calnin, former production manager of JCW; theatre historians Frank Van Straten, Mimi Colligan and Elisabeth Kumm; Dr Philip Goad of the Department of Architecture at Melbourne University; Lewis Johnson and Dr John Rickard. Elisabeth and Mimi remain active with the renamed and rebranded group today.

Encouraged by the enthusiasm of that meeting Evan became quite tenacious. I would receive daily calls indicating his progress in meeting and talking to people who might be interested in the cause and lend it the necessary prestige. He was dynamic in making these contacts but his efforts, however, brought little, if any, financial support.

As mentioned previously there was some synergy between the aims of the Australian Association of Theatre Technology and Evan’s proposals and I spent some time investigating some form of amalgamation which would give his proposed ‘Trust’ some financial backing. However Evan’s sense of purpose was unidirectional and the idea was soon abandoned.

Pressure of work at the Alexander removed my focus from the formation Evan’s dream and his calls became less frequent, the last being his advice that he had to return to the UK. It seemed that he and his wife (Mogg) ran a school for actors’ children in London and his services were required back there for a time.

He left behind a very supportive group to continue his work.

My last contact with him was on a visit to London some years later where he took me on a tour of the theatres of Shaftsbury Avenue and the East End.

In some respects Evan’s goals have been reached although not through a ‘Trust’. Her Majesty’s has been refurbished by Mike Walsh who holds the theatre industry in his heart and our beloved jewel, the Princess’ is now presenting major West End shows having been lovingly restored by The Marriner Group who have also retained the Comedy. Significantly they have grouped themselves into Melbourne’s ‘East End’. Evan would be delighted!

The next big thing did come through the door that day at the Alexander Theatre although I didn’t realise it at the time. 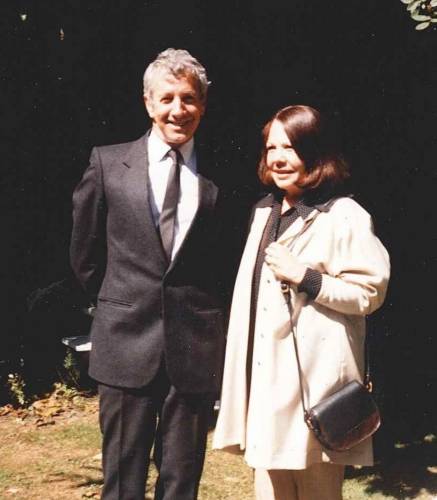 Evan Hercules and his wife Mogg.

Courtesy of the Abi & Fabian Hercules. 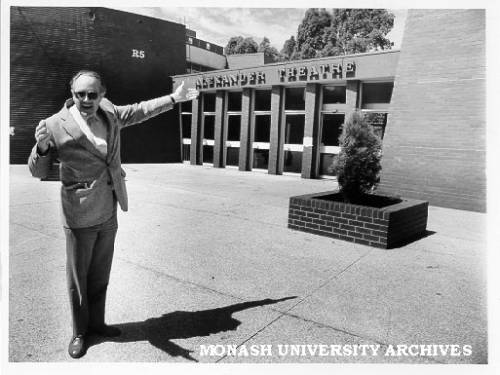 Phil A'Vard outside the Alexander Theatre at Monash University, 1990.

Read 978 times Last modified on Sunday, 15 March 2020
More in this category: « Where Was This Photograph Taken? ‘The Show Went On’: Hiawatha »
back to top