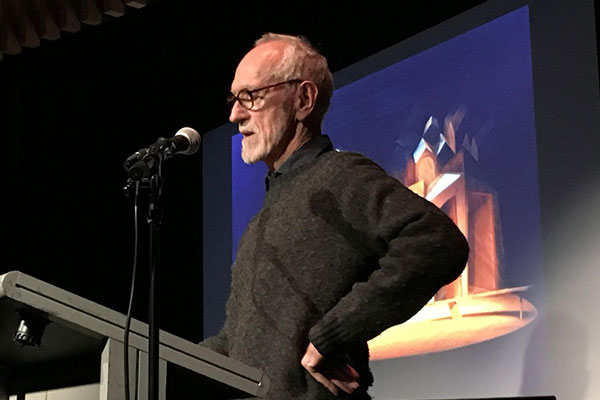 Michael Pearce in Conversation, The Channel, Arts Centre Melbourne, 11 May 2019.West Australian born Michael Pearce: actor, dancer, visual artist and designer for dance, drama and opera companies in Australia, New Zealand, Europe and Asia. Initially intending to be an actor, Michael commenced his studies under Wal Cherry in Adelaide. It was around this time that he met the impressive and inspiring Zora Semberova, a Flinders University Faculty member. In 1938 at the world premiere of the ballet Romeo and Juliet—with Sergei Prokofiev's score—she had danced the role of Juliet for a Czechoslovakian ballet company. (It was not until a year later that Galina Ulanova danced that same role, but in Leningrad and with a different choreographer.)

Michael began his professional career in 1972 as resident designer for the State Theatre Company of South Australia under the directorship of George Ogilvie—but not before taking to the stage in the role of a policeman in the Feydeau farce Cat among the Pigeons, directed by Ogilvie, in 1970. Anne Fraser was the designer and Michael became an assistant to her, and to Hugh Colman, the latter introducing him, a little further down the track, to Margaret Lasica's dance classes in Melbourne, having earlier attended Cheryl Stock's ‘Primitive’ series of dance classes in Adelaide. Michael was associated with designers Kristian Fredrikson, Richard Prins and Shaun Gurton, among others.

In 1976 he headed overseas to Europe, the United Kingdom and the United States where he had the good fortune to meet the legendary Marilyn Wood, a founding member of the Merce Cunningham Dance Company who went on to a ground-breaking career as a ‘choreographer of cities’, creating the first-ever site-specific performances.

Since returning home in 1978 to Australia, Michael has designed sets and costumes, dyed and hand-painted costumes, exhibited pastel and charcoal works on paper—in Australia and in Asia—undertaken Asialink Residencies, taught stage design at the Hanoi Academy of Theatre and Cinema, is a regular guest teacher at the Victoria College of Arts and was Artist-in-Residence in Hong Kong and Visiting Fellow at the West Australian Academy of Performing Arts. He was an original member and co-creator of the performance trio ‘Chrome’ which performed at festivals and events throughout Australia, Europe, Canada and the United States.

Michael's talk ran in tandem with an exhibition of his pastel works on paper at 45Downstairs, ‘Unfolding’, which many of us were fortunate enough to see—and his talk also coincided with performances of the work ‘Unspoken Dialogues’, part of The Australian Ballet's New York season in May. He has designed nine works for the company and is a frequent collaborator with their resident choreographer Stephen Baynes.

We were delighted to be given the opportunity to view examples of his work—a slide-show, a costume or two, a set model—and once again we felt the hour was simply not long enough to take in all that he had achieved—and was still achieving. To remedy this, in nearby Bombini Buzz a group of us kept ‘Michael Pearce in Conversation’ for at least another hour!