Pansy Montague: Sincerely yours La Milo. Postcard published by Montgomery & Co., Nottingham, c. 1900s. Private CollectionKatie Flack has been obsessed with Pansy Montague for almost 10 years, ever since her interest was piqued when she fielded an enquiry on the research desk at the State Library of Victoria, where she works. In 2011, she received a staff fellowship through the SLV which enabled her to delve further into the life and career of this fascinating Australian artiste.

Pansy Montague was a entertainer in the late nineteenth, early twentieth century, in Australia and Great Britain. She developed a music hall act which saw her strip, cover herself in while paint and with a few loose bits of strategically placed drapery, pose as classical statues. A perfect figure and an ability to stand still helped immensely. She was a professional living statue. In her heyday, she earned more than a cabinet minister and at one time performed before a crowd of 50,000 people.

Katie spoke to a small gathering at the SLV on Wednesday, 5 September, presenting her findings so far and showing a selection of Pansy ephemera from both the State Library’s and her own collections.

By admission, Katie calls herself a “passionate potterer”, but with a librarian’s tenacity and a need to find out more, she has uncovered almost all there is to know about Pansy Montague. Theatre historians such as Anita Callaway, have touched on Pansy’s Australian career, but Katie could now be said to be the 'world expert' on the topic.

Like many performers, Pansy’s origins are still somewhat hazy (so hazy in fact that even her living relatives do not know when she was born and what happened to her). Was she the illegitimate daughter of Colonel Montague or the child of Irish-born Australian immigrants, Charles and Jane Manley?

Pansy grew up in Melbourne and made her stage debut in 1898, performing initially in popular dramas and in pantomimes, rising quickly from chorus girl to leading lady. What talent she had as an actress was enhanced by her 'natural advantages' and 'chubby charms'. By the early 1900s, she craved something more – and with the assistance of Alec Laing (aka Cruikshank, a lightening sketch artist) she developed a new line of entertainment – living statues. Styled as the 'Modern Milo', her first outing was at the Melbourne Opera House in June 1905. 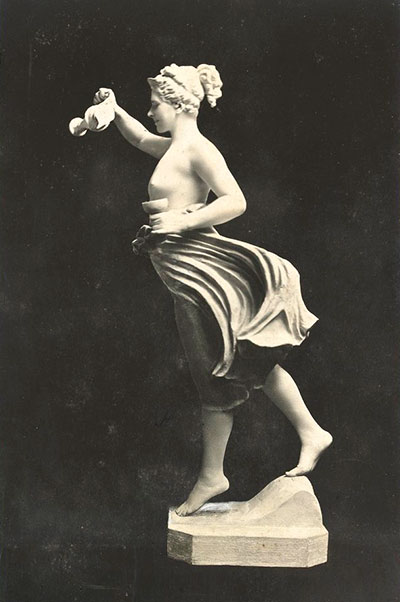 Hebe - "The Modern Milo" in one of her poses. Photograph by T. Humphrey & Co. State Library of Victoria, H2006.10/4Imitating classical statues was not entirely new, the tradition can be traced back to the seventeenth century, and in recent times, pose plastique performers such as the Faust Family and Mlle Lotty had presented similar turns in Melbourne. Whereas other acts had used coloured projections to enhance their routines, Pansy posed on a plinth in a brightly lit garden setting before which various people would pass, from policemen to canoodling couples.

Her act was a huge hit and she performed sell-out shows throughout Australia and New Zealand. But London was calling. Having adopted the sobriquet 'La Milo', she made her London debut the following year at the Pavilion Music Hall, where once again she proved a sensation. By this time, her repertoire comprised some 20 different poses based on classical statues such as La Milo, Electra, Sapho, and Diana. Much of her knowledge and detail came from studying statues in the National Gallery of Victoria. To encourage repeat visitations to the theatre, her act changed regularly and she introduced new novelties. When for example, Velasquez’ painting of Venus went on display in London for the first time, she copied the pose and introduced it into her act.

For three years, from 1906-1909, Pansy was big business. She reached a career high in August 1907 when she participated in the Coventry pageant dressed as Lady Godiva, wearing nothing but fleshlings and a long blond wig. Witnessed by over 50,000 people, she paraded six miles through the streets of Coventry on horseback.

Throughout her career she had to contend with issues of public morality, but by the time of the Lady Godiva episode, the voices had got a little louder, championed by the Bishop of London. Soon acts such as hers were being looked upon as indecent and music halls were being discouraged from including them on their bills.

Around this time she met Ferdinand (Fred) Eggena - and the two were “married” in Birmingham in December 1908, but Fred proved to be a confidence trickster and the marriage was a sham. Pansy also became embroiled in one of his schemes to obtain expensive jewels under false pretences. Eventually Eggena was caught and the case went to trial, but fortunately for Pansy she was deemed a 'mere tool in the transaction' and was not charged. The incident did not help her career. With the war clouds gathering, London was cooling and by 1914, she was in America. But her act was no longer a novelty, and there were other younger people doing similar things. She decided on a complete change and by 1921 had opened the La Milo Beauty Salon in New York. 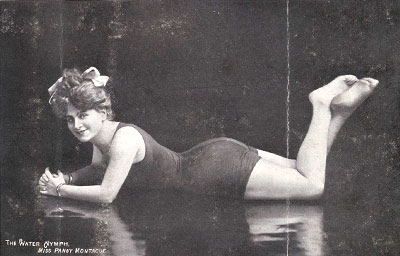 The Water Nymph, Miss Pansy Montague. Photograph by Alfred Cecil Rowlandson. State Library of Victoria, H96.160/1225From this point on, Pansy proves harder to track down. By 1924 she is back in Australia, touring throughout county NSW and QLD in pantomimes, and in 1929 she is mentioned in relation to a special event to mark the closure of the Sydney Tivoli, but after that the trail grows cold. Pansy disappears.

No doubt one day Katie will find out what happened to Pansy – and when she does, let’s hope she shares it with us. A fascinating figure (in more ways that one), Pansy Montague was an Australian original and a leading exponent of the art of 'living statues' that deserves to be rediscovered and placed once more upon a plinth for today’s audiences to admire.

View the embedded image gallery online at:
https://theatreheritage.org.au/on-stage-magazine/general-articles/item/560-pansy-la-milo-montague#sigProId54455f788f
More in this category: « Phil Day, Comedian (1844-1887) “A Swelligant, Elegant Party!” »
back to top