Let us not forget the days of Community Singing
By Bob Cunningham
Somewhere in the mists of time the concept of community singing began. To my reasoning its birth was in local pubs in the United Kingdom in Victorian days, when singing around the piano in those places and also at home was a regular occurrence. The Victorian music hall quite possibly was more intentional in purpose, as the eager audience was encouraged by tightly corseted, coarse throated ladies to join in the choruses of her medley of songs.... 'Come, come, come and drink wine with me...'
Even in mid-fifties London, Collins' Music Hall, Islington Green and the Metropolitan Music Hall in Edgware Road still had entertainers belting out the old favourites from the previous century to be joined by the audience with the well-known choruses... 'Champagne Charlie is my name, Champagne drinking is my game...' etc. At the cavernous Metropole Music Hall in Glasgow, the rowdy post-Saturday football audience was only interested in singing Scottish songs with Andy Stewart-like clones. But these were merely nostalgic separate sing-a-long events left over from a previous age; the full blown organized community singing was something entirely different. 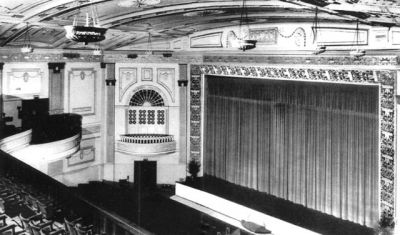 Historically, the First World War must have brought with it the advent of morale-sustaining community singing in live theatres, early cinemas and local halls. The songs were highly sentimental and patriotic, such as 'Keep the Home Fires Burning', 'Roses of Picardy' and 'Soldiers of the King' – an almost limitless number to be sung by a seemingly female audience. They were even allowed to knit socks and jumpers for the war effort during these organized sing-a-longs. The fashion for communal vocalizing didn't really die out after the war, as the world was soon to be plunged into the Great Depression, when further suitable morale-lifting songs of the twenties and thirties were hopefully sung – 'I want to be Happy', 'Pennies from Heaven' and 'Underneath the Arches'. Many of the songs came from movies, revues or stage musicals of the time.

My earliest memories of community singing came from the late thirties, towards the end of the Depression, when at the Regent Theatre, Thornbury, my mother took my sister and me to that weekly big social occasion for many housewives. Admission was cheap compared to the price of an evening at the pictures; it may have been sixpence, I do not know, but our attendances were during the school holidays. I doubt if my mother went more frequently, however I do know that a hat, gloves and handbag were de rigueur for every lady attending. 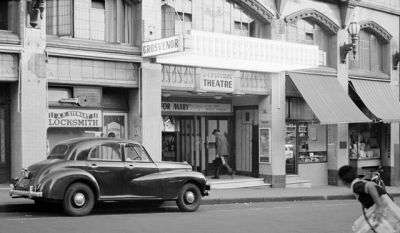 Entrance to Grosvenor Theatre ca.1956, photo by Mark Strizic, SLVOn the cinema screen were projected the words and occasional advertisements for local businesses. There was a jovial compere, sometimes a radio personality or a professional singer, a piano – and that was all. Sometimes there would be a guest vocalist, and of course there would be prizes donated by local stores for lucky seat numbers or quick quiz questions. These I remember during the war days of community singing as they were very welcome prizes. They were no more than shopping vouchers from local traders, perhaps five shillings in value. I remember that Paynes' Biz-Buz vouchers were highly prized, as it was the leading kitchen and hardware store in Thornbury, and on one occasion my excited mother was one of their prize winners. 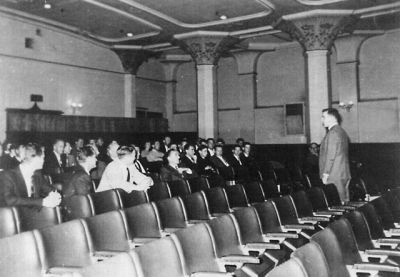 The auditorium of the Grosvenor Theatre, CATHSThe Second World War brought another upheaval to the world and many patriotic songs were revived from the WW1 song lists, plus the new ones that began emanating from England, 'White Cliffs of Dover', 'A Nightingale Sang in Berkeley Square', 'Kiss me Goodnight, Sergeant Major'. We had heard recordings of Vera Lynn, 'the Forces' sweetheart' on radio and learnt that her contribution to the war effort was singing to servicemen, encouraging them to forget for a moment their imminent engagements in battle, and join in singing with her. All pretty emotional really, especially the 'We'll Meet Again' song that became her signature tune. A great number of sentimental songs were sung during those tentative years, but patriotic ones abounded like the 1939 sure-fire hit 'There'll Always be an England'. I might add Gracie Fields did her very best to lift the spirits of the fighting forces too.
By that time I was singing in the church choir and loved the added opportunity to go to community singing during the school holiday breaks and sing enthusiastically with the large audiences. For no reason whatever, my favourite song was 'Red Sails in the Sunset', a very sentimental 1935 song inspired by red-sailed yachts off the Irish Coast. The boy 'singing wonder' on screen during the early days of the war was Bobby Breen, and his most famous song, 'When there's a Rainbow on the River', was a great community singing favourite. My school-mate John Pilgrim had a voice of equal quality, and sang his angelic little heart out on stage at the State Theatre on one occasion, but also did the community singing circuit for a few years. He later did vaudeville at the Armadale Theatre when it was briefly a variety house. Professional entertainers frequently sang, giving added variety to the programme.

Radio personality Charlie VaudeBig time was a trip to the city for community singing at the Central Hall in Little Collins Street; in those days it was part of the Victoria Coffee Palace complex. The hotel is now called the Victoria. Central Hall, seating not many more than my high school assembly hall, became the New Central Theatre in 1942 and then the Grosvenor cinema in 1945. It is now the car park of the hotel. I remember distinctly the strange round arched windows which lined the walls of the auditorium, with imitation daylight blue lighting shining through. Sponsored by radio 3DB, the compere was the popular Charlie Vaude, a one-time vaudeville comedian who had published a book of jokes. We had a copy of that book for years. I do not think Charlie Vaude's sidekick Renn Miller was there (they were a popular broadcasting duo) but I seem to remember a youthful Dick Cranbourne helping out. The ever-popular pianist Mabel Nelson accompanied every song without music. I still have visions of her, as she spent most of the time smiling to the audience as she played away. From memory, I think 3DB had some form of community singing at other times from their totally inadequate and cramped studios in Flinders Street. I saw a couple of quiz shows there years later, Hook, Line and Sinker was one, and observed Mabel Nelson's grand piano taking up half the audience seating.
Still war time and morale needed further boosting as the Japanese were approaching frightfully close to our shores. I can only imagine there were dozens of community singing attractions in a great number of Melbourne's suburban picture theatres. Radio and live theatre personalities must have worked overtime. Perhaps the most exciting venue for me was the old King's Theatre in Russell Street. It was a delightful Edwardian theatre built as I now know in 1908 by a Mr William Anderson a Sydney entrepreneur who in fact bought the famous elephant Alice (1906) from the Wombwell and Bostock Circus when they auctioned off their stock and effects, and he took her to Sydney to his huge amusement park, Wonderland City at Bondi. That venture eventually closed and Alice was sold to Wirths' Circus in 1911. They owned her until her death at a great age in 1956.
I had never before seen such a beautiful theatre, with its elaborate plaster work, a superb richly gilded proscenium arch, and two balconies above the stalls, the dress circle being supported by slender posts in the stalls. Soon after that I was to be introduced to pantomimes at the Comedy and His Majesty's theatres, and experienced that warm and personal feeling of real people on stage, awakening my lifetime interest and love of the theatre. When my father returned home on leave in 1943 we were taken to the Tivoli on two occasions before he returned for duty in New Guinea. 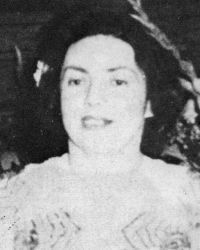 As for the King's Theatre Sunday afternoon community singing, this was in association with radio station 3KZ which also broadcast proceedings with Norman Banks as compere. He was to become the almost single voice of that radio station as he presented so many of their popular shows. We can thank him for the popular Carols by Candlelight that he pioneered in 1938, and still enjoy long after his death. Margot Sheridan, a most accomplished pianist, provided the music as competently as rival station's Mabel Nelson.
As expected there were guest artists to relieve hoarse throats of the enthusiastic singers, and the appearance of Nellie Kolle brought thunderous applause. I didn't seem to appreciate the moment, nor did I think this very formidable lady in a rather showy dress was up to much, for I thought she looked pretty old. (Indeed she was only in her early 50s, to a child that was OLD. She died in 1971.) However, when she sang without a microphone, I realized she was a great singer of old vaudeville songs. She really belted them out and, of course, encouraged the audience to join in with the choruses. My mother whispered, 'She is very famous!' It is funny what one remembers, but there is a distinct memory of her walking close to the footlights across the stage, whipping up the audience participation in her songs. Little did I realize that this was 'showmanship'. 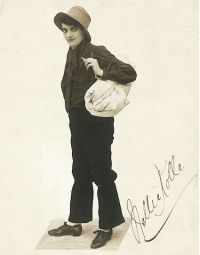 Male impersonator Nellie KolleOf course you find things out in later life. Nellie Kolle was born in England in the last decade on the nineteenth century and came to Australia in 1912 where she performed in musical comedy and vaudeville. Her roles as a male impersonator balladeer and principal boy in pantomime firmly established her reputation. The 'top hat and tails' English singer Ella Shields comes readily to mind and, like a young Robyn Archer ('Sentimental Bloke'), and female opera singers taking male roles (as in Fidelio), they were unflatteringly called 'trouser' singers.

So what happened to community singing after the war? The togetherness, urgency and mutual desire to forget for an hour or two the bigger picture of a world in disaster mode, were suddenly gone. It lingers on I suppose in those dreadful bus trips with the oldies as someone invariably wants to 'Show me the Way to go Home' on the return journey. Most join in, but begrudgingly. On a gentler note (excuse the pun) there is great value to be gained in retirement villages, where I have on a number of occasions been asked to play the organ for some community singing. As the enfeebled are wheeled in to the recreation room and handed their large print community song books, and as I play those golden old melodies to accompany their frail, tremolo voices, my memories keep flooding back to the old Regent Theatre, Thornbury, to the somewhat heartier war-time singing, I wonder why 'Red Sails in the Sunset' is not included in this community song book.

Last modified on Monday, 27 May 2013
Published in General articles