The exhibition of j.c. williamson ltd. costumes at Beleura on the Mornington Peninsula almost didn’t go ahead. Only days before the opening, Melbourne and its surrounds experienced a severe storm that brought down trees and blew off roofs. The road to Beleura, nestled among parklands and golfing ranges, was blocked by debris from the storm, and power to the area was cut. And before that, the ravages of covid had meant that Beleura like so many other ‘unessential’ businesses was closed and shuttered.

But on Thursday, 11 November 2021, the sun was shining, power had been restored, and a small ‘covid safe’ crowd made its way to Beleura for the opening of ‘My Fair Ladies’.

‘My Fair Ladies’ showcases costumes from the collection of Kevin Coxhead. The amazing thing about the fifteen costumes on display is that when Kevin acquired them, they were all in a poor state of disrepair following decades of wear and tear, in need of Kevin’s careful care and attention.

Kevin was previously a dancer with J.C. Williamson’s in the mid-1970s, just before the ‘Firm’ ceased operation—having held the position of Australasia’s number one theatre producers for over 100 years. Kevin’s costume collection began when he decided to look for the costumes he had worn in Gypsy. His search took him to The Costume Factory in Kensington (originally J.C. Westend), where former JCW costumes were being hired out for fancy dress parties and amateur stage productions.

It was a great thrill for Kevin when he located ‘his’ costumes, and he soon struck up a friendship with Maureen McInerny who ran the costume hire shop. So when Maureen came across costumes from notable shows, rather than put them back into circulation in the shop, she placed them aside for Kevin’s consideration. Over the years, Kevin’s collection has grown. He taught himself sewing and other tailoring skills. Hours of patient research and repairs has seen a pile of tattered garments transformed to their original splendour.

It is wonderful to be able to inspect these garments up close, to marvel at the skill of the original designers and the skill of Kevin whose careful restoration has made it impossible for the untrained eye to know what is original fabric and what is restoration. There is an unexpected delicacy in the selection of fabrics, their design and construction that belies the practical nature of stage costumes, that are generally designed to be seen from a distance and to be able to withstand the rigors of continuous wear during the run of a show.

Some of the highlights of Kevin’s collection have been assembled for ‘My Fair Ladies’ exhibition. As might be expected from the title of the show, costumes from the Lerner and Lowe musical My Fair Lady (1959) figure prominently, along with original garments from No, No, Nanette (1972), Irene (1974) and Camelot (1963). 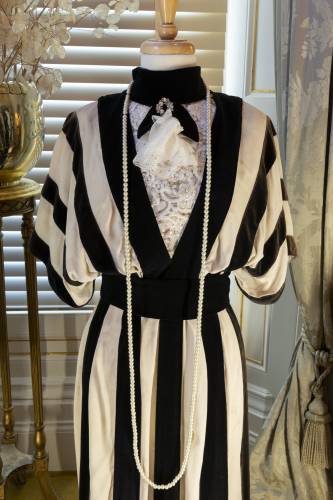 My Fair Lady (1959): Detail of Ascot costume, made after an original design by Cecil Beaton. Photo by Chris Groenhout. 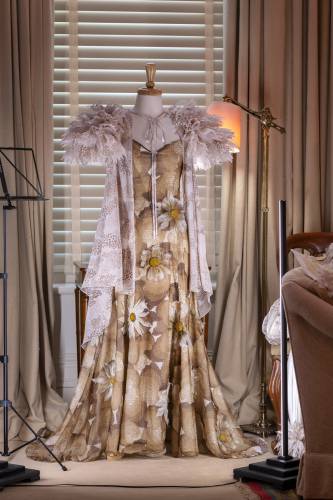 Nearly all the costumes are displayed within the Beleura House with one in an adjacent building. Kevin, with assistance from curator Ingrid Hoffmann, has carefully placed them around the house, selecting a particular room that will work as a backdrop against which to best display the colours of the fabrics and style of the dresses. For instance, in the Drawing Room, with its heavy drapes and shuttered windows are found two of Cecil Beaton’s costumes from the Ascot Scene in My Fair Lady: a gentleman’s frock coat complete with top hat and button hole, and a stunning dress of bold vertical black and white stripes topped off with a large Edwardian picture hat. When the Ascot dress came into Kevin’s possession it was in a very poor state having been ‘let out’ at the back to fit larger-framed customers at the costume hire shop.

In the Study is one of Kenneth Rowell’s designs for Act 2 of Irene. This costume was featured in the Fashion Parade scene and Kevin used stills from the production to help recreate the matching coat, hat and parasol. The coat, with its masses of hand-frayed ‘flower petals’ on the shoulders, was a particular challenge and success for Kevin. 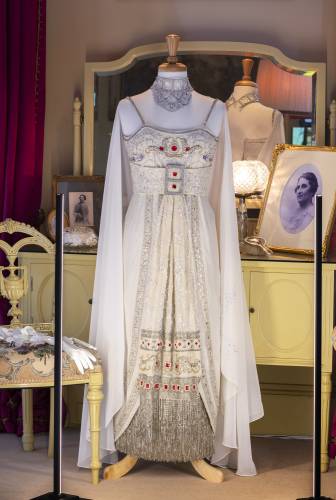 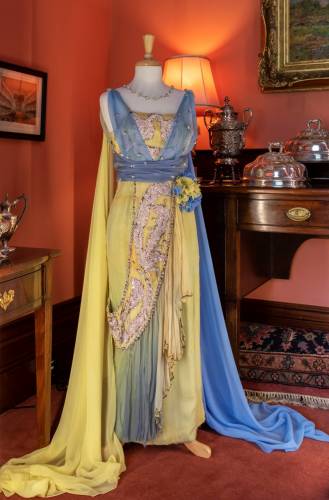 My Fair Lady (1970): Embassy Ball gown, made after an original design by Cecil Beaton for the 1970 revival. Photo by Chris Groenhout.

Another costume from My Fair Lady, holding pride of place in the Dame Nellie Melba Bedroom, is Eliza’s Embassy Ball gown. This particular dress took Kevin over a year to repair. The lace bodice needed to be completely recreated as did the belt. Another spectacular dress from the Embassy Ball scene (based on Cecil Beaton’s designs, but made for the 1970 revival) may be found in the dining room. A concoction of yellow and blue, this dress also took a year to repair with hundreds of tiny holes in the lace and sequined panels needing to be mended. 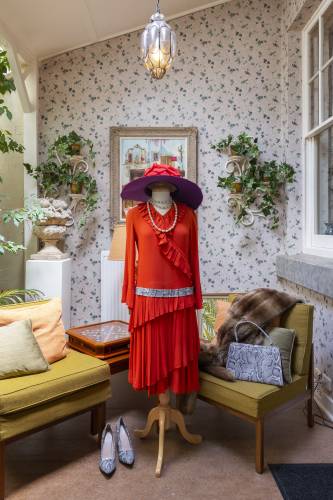 No, No, Nanette (1972): Act 1 dress, designed by Raoul Pene Du Bois, and worn by Jill Perryman. Photo by Chris Groenhout. 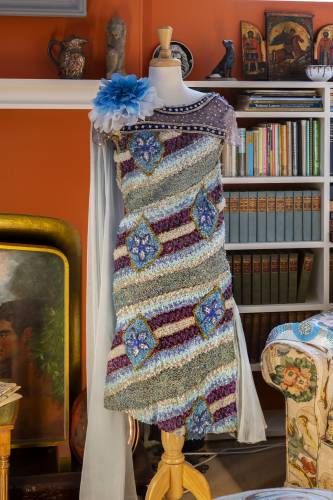 No, No, Nanette (1972): Act 3 finale dress, designed by Raoul Pene Du Bois, and worn by a member of the chorus. Photo by Chris Groenhout.

Jill Perryman’s Act 1 dress from No, No, Nanette is found in the Wintergarden. Created by the costume department at JCW from original designs by New York-based designer Raoul Pene Du Bois, the striking deep orange crepe silk dress looks vibrant against the white walls and hanging plants. Another dress from No, No, Nanette is on display in the library. Fully beaded in grey and purple diagonal stripes with diamond-shaped chevrons of blue sequins, this stunning dress which beautifully evokes the flapper era, was worn by a member of the chorus in the Act 3 finale. Badly damaged from years of hiring, it took Kevin two years to re-thread and insert strengthening panels to stop the dress from sagging under the weight of the many thousands of sequins, beads and pearls. 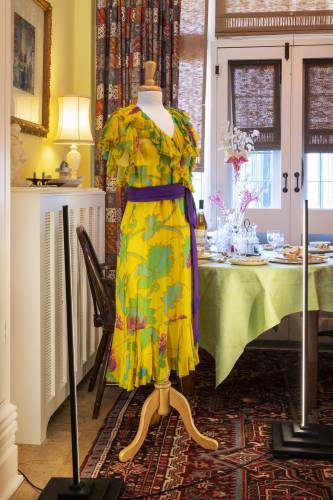 Dress designed by Beril Jents in the 1940s for Bettina Welch for an unknown play. Photo by Chris Groenhout. 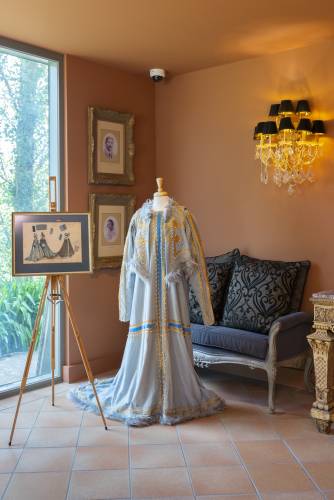 Camelot (1963): Act 1 Scene 1 costume by John Truscott, designed for the Winter scene. Photo by Chris Groenhout. The costume designs on the easel are courtesy of Andrew and Ai-Gui Guild.

Another outstanding costume, located in the Vestibule, is one by Sydney society designer Beril Jents created especially for Bettina Welch, whose name is on the label. Decorated with large green vine leaves on a yellow base, this silk chiffon dress probably dates from the 1940s. Bettina Welch is noted for having all her costumes designed by Jents, even her period costumes!

I have not described all the costumes in the exhibition, but a final word should be said for one of John Truscott’s costumes from Camelot, to be found in the foyer of the Pavilion (an intimate recital space) adjacent to the House. Originally worn in the Act 1, Scene 1 Winter scene, amazingly little repair work was needed to restore the medieval splendour of this creation. In researching the production Kevin located a drawing of the original costume in a private collection which is also on display.

Located on the Mornington Peninsula, Beleura is an hour’s drive from Melbourne via the Peninsula Link Freeway. Once the home of Sir George Tallis, a director of J.C. Williamson’s in the 1920s, and his son John, the house is filled with memorabilia and antiques. Evoking a lost world of theatrical glamour and social ease, it is the perfect setting for Kevin’s JCW costumes. ‘My Fair Ladies’ runs until 11 March 2022, and if you haven’t yet visited Beleura, now is the time to arrange a visit. Further details may be found on the Beleura website, https://www.beleura.org.au/exhibition-my-fair-ladies

Thanks to Kevin Coxhead and Ingrid Hoffmann for their assistance in the preparation of this article.