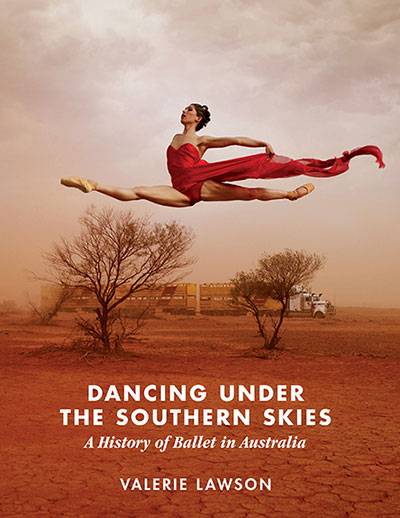 Some years ago, while looking at the ballet books in Dymocks, I picked up a recent book on Britain’s Royal Ballet. I can’t remember the name of the book or its author. I turned to the index to see if there was mention of my friend, Gailene Stock, who had recently been appointed as the Director of the Royal Ballet School. Yes, and there was a paragraph about her. She was quoted by the author as saying something along the lines of that the English boys lacked the robustness of their Australian equivalents, and that perhaps they spent too much time at a computer, where the Australian boys were more active with sports. To which he responded:
“To think we have come to this! Where we can be mocked by ex-colonials! Who, in Madame's (de Valois) day didn’t have a tutu between them from Perth to Sydney!”

Well, this wonderful new book by Valerie Lawson, certainly puts him in his place! I hope, whoever he is, gets to read this book, as he will blush with embarrassment at his ignorance. Far from having no tutus from “Perth to Sydney”, Valerie Lawson records a very rich history of Classical Ballet in our country going back to the 19th century.

The tours of Anna Pavlova, in 1926 and 1929, created a firm foundation for the love of ballet to flourish in Australia. She was tireless and toured extensively. Providing the inspiration to many to follow her steps, including a young man in South Australia, Robert Helpman(n). There are many links in this book back for dancers of my generation. Leon Kellaway who taught me at the Australian Ballet School had danced with Pavlova. I found the details of Pavlova’s tours very interesting and charming.  I found myself saying often, as I read this book “This would make a marvellous movie”.

Especially moving is the tragic story of Olga Spessivtseva, a fragile Russian beauty caught up in the bloody Bolshevik Revolution. Like Pavlova she was an enormous success with the Australian audiences. However, her tour of Australia was cut short when she went mad in Sydney. Well, I suppose it can happen. Lighter relief comes with the braggadocio tours of Colonel de Basil. Because of our isolation, our better climate, and living standards, many of the foreign dancers did not leave. Valerie Lawson quotes fascinating excerpts from one, Algeranoff, who stayed and whose letters back to his mother survive, and are a rich record of the period. Also, the dancers who stayed behind and became teachers trained many generations of Australian ballet dancers.

Through the rich times of the Borovansky Ballet—the main home grown ballet company to the celebrated long stay of the Ballet Rambert, the book is full of detail, and many, many things I did not know. I found the first part of the book the most interesting and entertaining. When we come to the Australian Ballet times, its history much overlaps my time around it, at the Australian Ballet School as a student with Margaret Scott, and Peggy van Praagh, and as a choreographer working with Marilyn Jones, Marilyn Rowe and Maina Gielgud. I lived through most of this history, and while knowing the broad details, Valerie Lawson again fills in much I did not know. She quotes and/or mentions a deal from dancers who have sadly now prematurely passed on like Kelvin Coe, Gailene Stock and Ross Stretton. However, as many of the other protagonists are still with us, happily I add, she has not been able to critically judge them to the same degree that she was able to do with the earlier ones. But, what I especially liked about the book was that it records and celebrates the many achievements of Peggy van Praagh.

Valerie Lawson devotes much of her later pages to her admiration of Graeme Murphy and the designer Kristian Fredrikson. While this is entirely justified, it does narrow the scope of the book somewhat. Her focus is clearly on the Australian Ballet, but this rich history of ballet in Australia, has even more people, ballets, to describe and celebrate.