Setback of Standards in Australia 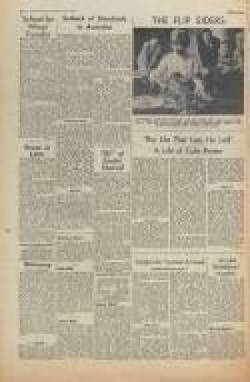 The Stage, 17 August 1967, p.20Standards of theatre in Australia have recently been set back at least a decade by three appalling productions staged by the mis-named Australian National Theatre, which recently has taken a three-year lease on the Princess in Melbourne.

The plays are The School for Scandal, Macbeth and The Merchant of Venice, all set for the schools. But school children are likely to be put off Shakespeare for ever after seeing these productions.

The least bad production was the Sheridan play, which had a simple production, with no gimmicks or business, was fairly static, had no sense of style or period and a certain amount of hamming. Despite all this, some of the play’s witty lines managed to get through, and skeleton-type sets were pleasing.

Macbeth, however, could hardly have been worse with the leading actor totally inadequate, sometimes inaudible, and on the first night the battle scenes were greeted with loud laughter by the audience. Most of the lines were repeated in a sing-song tone. The Merchant of Venice was likewise boring, the Portia and Bassanio standing out only because the remainder of the company was so bad. There was no pace, no sparkle, no distinction and no sense of imagination anywhere.

Out of it all only costume and set designer Anne Fraser emerged with any honour. Most of the actors are unknown and many seem to have graduated from amateur companies and making their professional—and classical—debuts. By the time the third production was reached most of the Press seemed unanimous that the company possessed little talent and the ANT has a long way to go to live up to its name.

It is understood that the ANT received an annual subsidy from the State Government, directly or indirectly, of $40,000, plus donations. This is far more than the Union Theatre Repertory Company in Melbourne receives from its three sources—the Australian Elizabethan Theatre Trust, the University of Melbourne and now the Melbourne City Council. Yet the Union is attaining standards comparable with the best from overseas. There are many who now fell it is time the ANT became extinct and its subsidy given to the Union and or the St Martin’s Theatre Company which receives no subsidy at all.

Opera in Australia is proving a sell-out through a subscription scheme thought up by Harry M. Miller, who is acting as commercial and promotion consultant to the Elizabethan Opera Company.

In Melbourne, where the Company are currently staging four operas—plus one of last season’s revived for one performance—the top price per seat for one opera is Aust. $5.00. But by taking out a season ticket for four opera the total cost is $12, a saving of $8.00. And anyone under 26 can see all four opera, on Monday nights, from anywhere in the house for a total of $3.00.

The result is that in Melbourne whilst last year’s occupancy for opera was 53% capacity this year there is a 100% capacity, and even with the lower price a 30% increase in revenue. In Melbourne the subscription series covered 87% of the entire capacity throughout the whole season, the youth series completely sold out in the day booking opened, and the whole season sold out just a few days after over-the-counter bookings opened. It is the first time in the history of theatre in Australia such an occurrence has happened. Standing room can be obtained on the night at $2.

In Sydney, where the company go after Melbourne, the Youth series, sold out in two hours for the entire season.

Mr Miller told The Stage Australian Correspondent: “It took just five days for the entire five-week opera season in Sydney to sell out on subscriptions. This meant that six weeks prior to the opening night in Sydney there was not a single ticket available. This has certainly never before happened for any attraction in Australia. Occupancy and gross figures are the same ratio as Melbourne.”

The names in the present season are not big enough in themselves to attract patrons—Morag Beaton, Macella Reale, Rosemary Gordon, Donald Smith, Raymond Myers and Neil Warren-Smith leading the company.

Now Mr Miller is hoping to do the same with Melbourne’s Union Theatre Repertory Company, to which he has recently also been appointed commercial and promotions consultant. For the forthcoming season of five plays all are being offered for a total of $8 or any three for $50, a saving of up to $2 per patron. R.S.