On April 10th 2013 composer and musician Bruce George turned 100 celebrating his birthday with his daughter Shelley and family at their home at Hope Island on the Queensland Gold Coast. A prolific composer Bruce George is most well-known for his 'Pocket Opera' The Ballad of Angel's Alley written in 1958 which the Union Theatre Repertory Company had great success with in 1962. 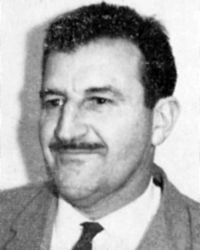 Bruce was educated at St. Paul's Cathedral Choir School in East Melbourne from the age of eight until he was fifteen. He then had two years at University High, and was a student teacher from eighteen until he was twenty-five. His musical education was three quarters of piano tuition at age six, and in his youth he was Weightlifting Champion of Australia for six years. He worked as a musician from the age of sixteen until he turned seventy-six and at one time had his own six-piece band, the Bruce George Ensemble. Twice when times got tough he took a job as a clerk in the Navy Department. Bruce was based in London from 1965 until 1974 and during that time he was musical director of Noel Coward's 70th Birthday Concert A Talent To Amuse at the Phoenix Theatre, London, on the 16th December 1969. The star-studded cast included; June Bronhill, Cyril Ritchard, Danny LaRue, Joyce Grenfell, Maggie Fitzgibbon and Stanley Holloway.

More in this category: « May Robson Pattie Browne »
back to top