Les has taught voice to generations of actors, at the National, VCA, Federation University and ShowFit music theatre academy. Alongside early performing experiences with J.B., he had the honour of collaborating with the great acting teacher Lisle Jones.

Reminiscences: My association and friendship with Jack Beresford Fowler—J.B. LESLIE CARTWRIGHT first met J.B. Fowler in the late 1960s. By way of a follow up to Cheryl Threadgold's biography published in On Stage during 2021, Leslie recalls his association with the veteran Shakespearian actor and theatre pioneer.

It was 1969 and I was studying English and Linguistics at Monash University. Word had spread that one of the original cast of On Our Selection was looking for actors to perform scenes from the play. I knew the play and its characters and liked the idea of performing something quintessentially Australian, and light-hearted. I contacted J.B. and after a phone conversation was invited to come to a reading. He subsequently cast me as Joe (he played Dad) and we performed a selection of scenes for various literary interest groups, such as the Australian Literature Society and the Henry Lawson Society.

This experience led to numerous other performances over the next few years, mainly scenes from Shakespeare plays for meetings of the Melbourne Shakespeare Society. We only ever performed monologues and/or scenes, never the whole play, but they were well rehearsed and performed in costume. Despite a hearing impairment at the time, J.B. knew the texts thoroughly and had a good rapport with fellow actors, so timing and cues were generally secure. 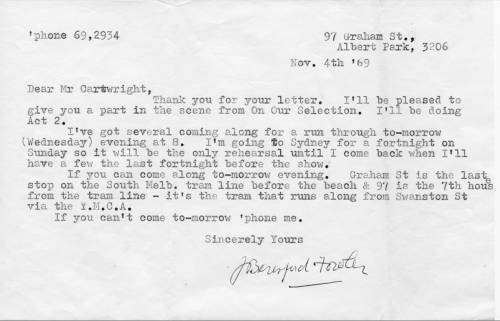 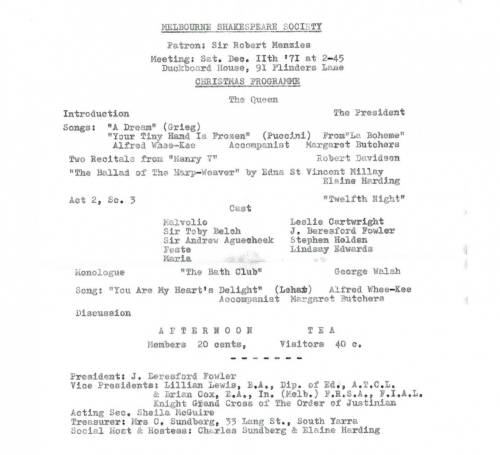 When I met him, J.B. lived in a large bed-sitting-room in Graham Street, Albert Park. Rehearsals were usually held there. He was always welcoming and happy to be ‘working’.

His approach was to give general guidelines at the start and then run scenes. He was never critical out-right, more oblique with his notes. For example, he would sometimes describe how someone else had played the role, certain traits they had emphasized, or how they had pointed certain words. We’d have tea and biscuits at the end of a rehearsal and there was good camaraderie.

Other actors at this time

I remember that J.B. worked with several gifted actors on a regular basis: Lindsay Edwards and Robert Davidson. There was mutual respect and Lindsay and Robert gave some fine performances under J.B.’s aegis.

J.B. as actor in his last few years

I was privileged to see J.B. perform solo, with some great monologues from King Lear, Richard III and a number of other plays. He completely inhabited a role and it was transfixing to watch him. Time, place and circumstances were real. Acting, dramatic art, was his life. In The Age notice the obituarist incorrectly states that J.B. was born in England. As a Sydney-born Shakespearean, he would have been amused by this error.

It’s Saturday midday, 11 December 1971. I’ve collected J.B. from his home in Albert Park and we’re travelling in my car to the city, where we’re to perform scenes from Twelfth Night for the Melbourne Shakespeare Society. I’m not au fait with the roads around that part, so I rely on J.B. for direction. Suddenly he bursts into song, full-throttled and resonant: ‘Follow the Tram Line’, a song from the 1920s. Good directions. I can hear J.B.’s hearty singing now.

J.B. passed away on 17 July 1972. His death was reported in the news pages of The Age the following day.

He was a gentleman and an Australian theatre pioneer who gave generously and whole-heartedly.

Published in Profiles
Tagged under
Be the first to comment!
Read more...