On 29 March 2022, the S,B&W Foundation, as part of their local North Sydney Council’s Senior’s Week Program, held a special event celebrating the greatly-loved but sadly-demolished old Music Hall, Neutral Bay. An afternoon of  songs, memorabilia and stories recalled memories of the popular Victorian-style theatre restaurant founded by George and Lorna Miller in the 1960s. Actors such as Barry Creyton and Noeline Brown got their start there, and the following anecdote contributed by BARRY CREYTON was one of many shared at the event. 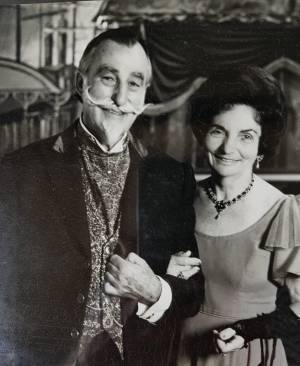 George and Lorna Miller, the host and hostess of the Music Hall Theatre Restaurant, Neutral Bay. Courtesy Christine Little.In 1961 when I first moved to Sydney as an aspiring actor, I knew many at the Independent Theatre including my long time friend Maggie Dence.

I set my sights on the newly refurbished Music Hall Theatre at Neutral Bay. I determined I would play the villain in East Lynne, a part my grandfather had played late in the 19th century. I was twenty years too young for the part, but I virtually badgered my way into it, and there began a series of villains, some written unashamedly by me, for me! These established me in Sydney theatre and led directly to my being cast in the Mavis Bramston Show.

I remember the opening night of East Lynne vividly. The paint was barely dry on the set, but the evening was an enormous success and established the theatre for many years to come. Here is where the Independent Theatre and the Music Hall Theatre merged for one exchange which has lived long in my memory.

The redoubtable Doris Fitton, the anchor of the Independent, was resplendent at our opening. As well as her renowned credentials at the Independent, she was also well known for sleeping through entire theatrical productions, including some of her own. But this I didn't know when I was introduced to her after the performance, so I was startled when she asked ‘Which one were you, the hero or the villain?’

I replied modestly, ‘I was the villain.’

I was relieved I hadn't played the hero, but less so when I discovered she’d dozed through much of the evening.

Those were heady days in Sydney theatre. The Ensemble, the Music Hall and the Independent were brave standouts when most of the mainstream theatres were filled with the lavish J.C. Williamson productions. 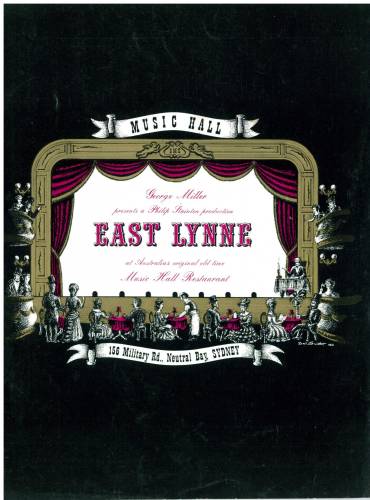 The first show in 1961 was East Lynne, a melodramatic Victorian tragedy, in which Barry Creyton played a moustache-twirling villain 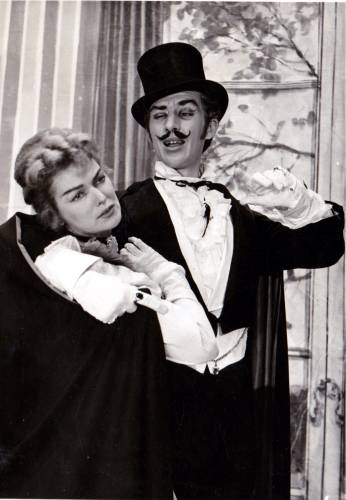 Sydney theatre has changed over the years, some for better, some (like the demolition of so many beautiful theatres) for worse. But the spirit established by the Independent and the Music Hall still exists, I’m sure. You might keep it alive by singing a few bars of the number I did in East Lynne: As the evil villain, I had only one redeeming moment—1 sang ‘I Don’t Want to Play in Your Yard’, complete with soft shoe.

Thanks to Susan Mills, archivist at the S,B&W Foundation for her assistance in preparing this article, and to Barry Creyton for allowing us to republish his piece.

Memories of a Swell Double Act Actor, writer and director BARRY CREYTON recalls one of the highlights of his extraordinarily successful and busy career—the production of his play Double Act, which he wrote for himself and Noeline Brown. 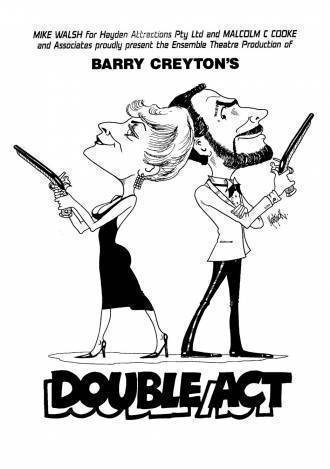 Double Act by Barry Creyton, Currency Press, Paddington, NSW, 1988. Theatre Heritage Australia.My friendship with Noeline Brown goes back to 1962 when we were in a revue at the Phillip Theatre—What's New? The critics said ‘not much’, and predicted that none of the cast would ever be heard of again. Apart from Noeline and me, there were Maggie Dence, Reg Gorman, Janet Brown, Arlene Dorgan … and in a few short years following this limp revue, all of us managed to carve a considerable niche in Australian show business.

It occurred to me during this run that Noeline and I shared a sense of humor, and we had that very rare, innate quality essential for playing comedy—a reciprocal sense of timing. We experimented with improvisation, in the style of our idols Nichols and May, and some of our sketches found their way onto radio station 2SM as comedy interludes. This led to our being offered a contract with Festival Records for whom we made two comedy LPs, the first in Australia. The first of these, The Front and Backside of Barry Creyton and Noeline Brown was a staggering success. (The ‘backside’ was crossed out and corrected with ‘flipside’) In its first week of release, it outsold the Beatles, the Stones and Presley … And was banned on every radio station in the country.

At the same time, I was enjoying success at The Music Hall Theatre where my range of villains had established my name in Sydney theatre. I urged Noeline to join me in The Face at the Window as a hip-swinging, cigarillo-smoking Woman of the World. She was terrific, no surprise. In a diametric change of genre, we also played children’s matinees of Beauty and the Beast … Noel was ‘Beauty’ I add, to avoid confusion.

She went on to play the saloon gal in the parody of westerns I’d written for us, How The West Was Lost. I was to play the bad guy opposite her, but The Mavis Bramston Show took over my life, and I left the Music Hall.

Again, Noel came along for the ride and played the original Mavis, so well-disguised she was unrecognizable.

In the following years, we continued on the Bramston Show until I left the cast in 1966 to do my own Barry Creyton Show for HSV-7 in Melbourne. 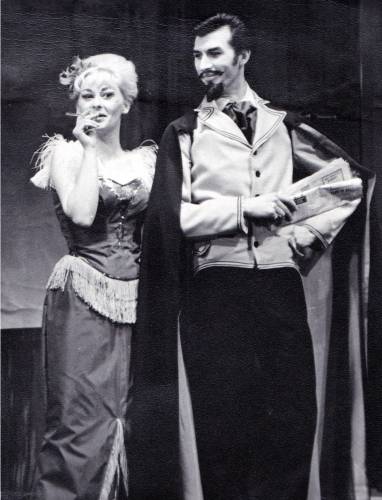 Noeline Brown and Barry Creyon in The Face at the Window, 1963 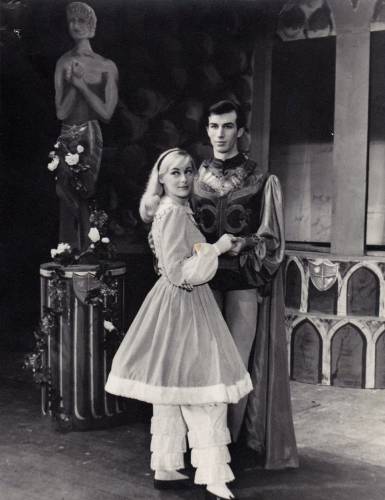 Noeline Brown and Barry Creyon in Beauty and the Beast, 1963

I spent a dozen years in the UK, in theatre, radio and TV, then returned to Australia in the late 70s for what I thought would be a three months gig in The Naked Vicar Show. This turned into twelve years of rewarding TV and theatre in my home country.

I yearned to work with Noel again, but no appropriate play came to light. I drafted a play for the two of us and it sat around for a while. Then, while on tour with the play Corpse, I had a serious motorcycle accident which landed me in traction in a Perth hospital for a month, followed by a further six months in plaster back home in Sydney. I had time on my hands—and a draft of a two-hander comedy. I spent many of those months refining the play. I called it Double Act, and it dealt principally with marital incompatibility—two people who find it impossible to live either with or without one another. In fact, in the text, I alluded to my two principal sources of inspiration: Private Lives and Who’s Afraid of Virginia Woolf?

At Stuart Wagstaff’s suggestion, we did a reading at my apartment for his agent Harry Miller. Miller sat through it patiently and then pronounced, ‘No one will go to see this—too many words’.

I was discouraged, but immediately after Harry’s denouncement, a greatly enthusiastic Sandra Bates asked to do the play at the Ensemble. We opened in 1987 to universally rave reviews. We broke box office records for the Ensemble, and a year later in a return season, did it again. 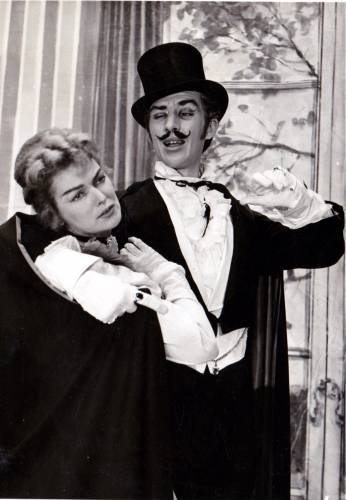 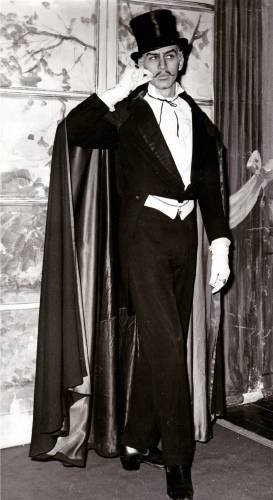 Barry Creyton as the villain in East Lynne, 1961

The play was bought for New York and London. The New York contract was handled badly and the play sat in limbo for some time. In London, it was produced in the West End in 1988 with the wrong cast, the wrong director, the wrong designer and not least, the wrong producer.

I saw the signs when the play was out of town in Windsor, but was too busy being Mister Nice Guy to complain or, as I later realized I should have done, pull the play from production. The leading lady, Lisa Harrow, had never played light comedy; her lightest touch could’ve stunned an ox. And leading man Simon Cadell, had all the gay insouciance of an open drain. Together they gave the impression of overplaying Medea for cheap laughs.

The reviews were mixed, and the play limped along for a short season at The Playhouse, and died. Greatly disappointed and angry with the producer who'd denied my cast of choice, I refused when he asked for the foreign rights. Even though I did so in a fit of pique, this turned out to be the best move I could have made. A week later, the powerful London agent Patricia Macnaughton asked for the foreign rights and I granted them without hesitation.

Since then, Double Act has been produced in more than twenty languages with major international stars. Over a thirty-five year period, there was no time at which Double Act was not playing somewhere in Europe, and in Germany, sometimes in multiple cities simultaneously. I saw the Berlin production which was beautifully executed by two dazzling stars. In Madrid, the Spanish version ran for a year. In Canada, it starred the great comedy actor George Segal, and on the US east coast, Keir Dullea played opposite Tony Award winner Bonnie Franklin. In Paris, Jean-Pierre Cassell and Spanish movie star Carmen Maura played to capacity.

Of those I’ve seen, I’ve been disappointed in only two productions—one was certainly London, and the other Miami, Florida where leading lady Sharon Gless was taken ill with encephalitis during rehearsals and replaced at a moment’s notice by the actress who'd played opposite George Segal in Canada. The result was two actors who seemed to be in different plays. At intermission, I considered burning the theatre down. I’ve also seen more than a few terrific productions, one Australian revival was a standout starring Gary McDonald and Diane Craig. 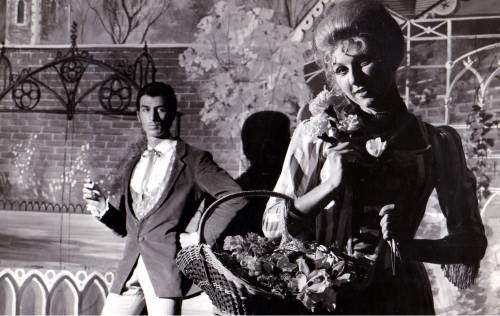 I’m not a prolific writer. There’s always seemed to be so much more to do within the wide boundaries of ‘show business’ to settle for one facet. In the US, I’ve adapted Shakespeare and Rostand and directed much of the former’s works for lavish audio productions, I’ve acted and directed for the celebrated LA TheatreWorks, and the Antaeus Theatre Companies, written four novels—my latest, The View From Olympus Mons, will be published in February 2022 and my screenplay Give Us This Day is due for production in ’22.

I’ve returned to Sydney on occasion to play and direct my own plays Later Than Spring and Valentine’s Day which, as I write, is playing successfully in Budapest. And I was reunited very happily with Noeline in a couple of Peter Quilter’s plays for the Ensemble, Glorious and Duets.

But for all the international success of Double Act, I admit that no production, no matter how dazzling, no matter how great the stars, has given me as much joy and satisfaction as that first production in 1987 at the Ensemble. It was a treat to be in the theatre eight times a week and to walk onto a stage with the absolute certainty that my partnership with Noeline was sound, and that we were in total accord with the material and in control of our audience. That kind of rapport is rare in a theatrical relationship.

Perhaps Noeline put it best when she gave me an opening night card for one of our many collaborations which read: MAKE A LUNT OF YOURSELF TONIGHT.

Unless otherwise stated, images are reproduced courtesy of Barry Creyton.