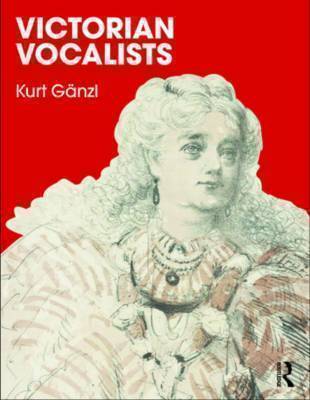 Victorian VocalistsMemory does not fade, it sinks slowly to the bottom of the cultural seabed where the more leisurely historian may pick up a forgotten item or two for later display, but a good historian works his oars upon the surface of the water, rowing all those he can from ship to shore so that their reputation, influence and admiration may continue.

Kurt Gänzl is such a master-oarsman. His Victorian Vocalists—now in its paperback incarnation—is another desirable work: a compilation of 100 singers, many of whom have not been celebrated in solid sources, or who have been hurriedly celebrated with that unjust brevity that editors—with one eye on page real estate—must reduce to a few lines.

At first glance Victorian Vocalists looks comprehensive in its choice of subjects but Kurt himself will tell you that for every one that was included, many were packed, readied and perfumed, but no stately barge came to collect them. The entries themselves though, are as comprehensive as Gänzl could make them (juicy stories held back for reasons of space and gravity, of course) and in what appears to be a Gänzl hallmark, many accurate items appear here that do not appear anywhere else. As I said, he is a master oarsman.

The Gänzl accuracy of included matter, and well-ordered entries leads to another Gänzl hallmark: the impression of a finer class of gossip. Part of the charm of his writing is the affection that he has for those who were born blessed or cursed; strived in vain or to profit; failed completely or succeeded unexpectedly; fell from grace or soared to heights; married into the aristocracy or married the confectioner; divorced in public or lived defiantly in sin; retired with majesty or died in poverty; lived after in books or lay buried unknown. There is an injustice to being forgotten if one has dared to strive in life, and here in Victorian Vocalists, there is some redress. Gänzl has a happy knack of knowing how to bring an engaging lilt to the cold language of dates and places, and so softens the ’necessaries‘ (births, deaths, marriages, concert highlights, and so forth) with just the right amount of seasoning and style. Gänzl was in the course of his career a singer with a fine basso voice, and so, I suppose, the instinct of the performing voice to hit not only the notes in pitch and length, but also to sell the song’s story by sentiment and subtlety has its twin in his voice upon the page. Would I be abusing metaphor to say that his writing entertains?

Another important feature is his choice of abstracts from various sources when he wishes to echo a printed sentiment or observation; many authors choose quotes or abstracted matter with little care, but Gänzl chooses his material as an manager might choose the vocal cast for a stage work—with great care—and this lends an ease of prose colour to the blocks of text; he is easy to read, and doesn’t make you regret the effort.

It is fruitless to name and number the persons Gänzl has rowed to shore with their slippers still dry, but among those upper hundred that he and Routledge have presented, one will find people like the slightly batty and wistful Ilma di Murska; the booming Agostino Susini who met his end by carriage accident; that sweet workhorse of the concert platform, Annie Tonnellier; and Priscilla Horton, who was blessed by the Muses with the twin gifts of singing and acting. Some of my personal favourites are the Vitellis, Giovanni and Annie, whose influence in Australia’s wild early days was long but at the time, barely noticed; the polarising Pasquale Brignoli who found fame in America; and the still neglected Caradori Allan of whom Gänzl says ’…was one of the greatest of all Victorian vocalists’.

As to the production of the book itself, I find it thrice valued: a thorough reference work and desirable addition to any historian’s shelf; a charming conversational exemplar of style from whose selection one may reacquaint oneself with any significant life and its highlights; and a good looking production by Routledge with a bold red cover similar to Gänzl’s two-volume master work on Emily Soldene (this last observation is appealing to me as a designer by career, as the bold red of the cover with its sans-serifed face sitting in happy contrast to the loose and vibrant style of the illustration of Maria Palmieri, speaks to the content’s style, where the facts are bold and without trim, but the illustrative nature of his writing is easy, subdued and genial. The designers are to commended for that level of book design). One element of the book’s design is to be lamented—not for itself, but in the book trade generally, where fashion and budget relegate portraits to small inclusions on the type-set page, drowning the photograph’s range of tones like a poor Ophelia in the river weeds (the type-friendly stock required to display the printed letter always plays havoc with the sharpness of printed images). I do miss the ‘gallery’ style of many years ago when portraits were given separate varnished paper to highlight the range of tones and it made for stronger photographs—they were also happily, larger. Perhaps one day we might see a Gänzl gallery in large format, and on good printing stock. I feel sure that the entrants in Gänzl’s work would be none too pleased and ruby faced at the dull tonal range given to their likenesses.

It almost goes without saying that it is a ’must have‘ for anyone interested in Victoriana in general, and in opera specifically, for the glittering world of the stage, and in particular opera, was an intersection between classes and a kind of unspoken estate that has not yet had a decent appreciation outside the musical world.

Kurt Gänzl is still out there, in blog and on keyboard, rowing away for the glory of the forgotten, and the benefit of us all.

Allister Hardiman is based in Melbourne, and has been in the design industry since 1983, working in portraiture, film & television, publishing, advertising, cartography and set design. In the 1990s he started reading about early theatrical life in Melbourne, and began researching on his own shortly after, focussing on the life of Robert Sparrow Smythe. His experience in the visual arts prompted the collecting of portraits and other photographs from the 1850–1900 period, many of whom are rare singers, actors, musicians, and platform speakers. He also writes short stories for kicks, giggles and whimsical colour.