A Disappearing Yum-Yum, or Whatever Happened to Clara?

Written by Kurt Gänzl
Clara Merivale sang on the stages of four continents, and more countries, during a reasonably successful career. But as KURT GÄNZL discovers, this London-born singer not only performed in musical theatre during the 1870s to 1890s, but ran her own company and went on to become a noted suffragette railing against the White Slave trade. 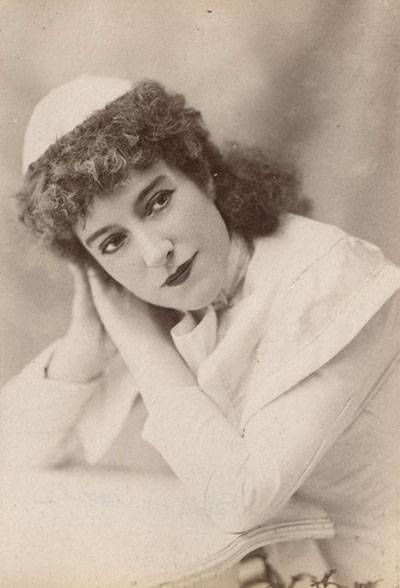 Clara Merivale as Falka in the comic opera of the same name, Sydney, 1893. Falk Album, Image 101/8. Clara Doherty was born in London, the third daughter and fifth child of Irish parents—Cornelius (b. 1825; d. Eversfield Hospital, St Leonards 8 January 1897) and Mary Ellen (b. 1825; d. 273 London Rd, St Leonards 1912) Doherty. When it came to peak-of-fame biog time, father Con was said to be ‘a sub-editor on the Irish Times’. Maybe he was at some stage. But the 1851 census shows him as a ‘commercial clerk’ and his wife as a ‘professor of music’. When the family moved back to Ireland, he appears mostly in a theatrical context: directing amateurs, organising concerts, and, ultimately, as the owner of Dublin’s Portobello Hotel, adjacent to the Gaiety Theatre. Michael Gunn of the Gaiety, one of his amateur actors, and backer of D’Oyly Carte, and Carl Rosa, numbered among his pals.

Two of the three Doherty daughters took to singing: the eldest [Mary] Caroline (b. Stanley Street, London 1849) and the youngest, Clara [Catherine]. They were, from an early age, prominent members of the Amateur Musical Society where, at the age of 15, Clara was noted for her ‘beautiful, full and rich contralto’. When local muso George Lee ventured into producing amateur opera, Clara was a 15-year-old Siebel in Faust (9 April 1870) and stole the show. The next year she sang Zerlina to the Don Giovanni of Leslie Crotty and the Elvira of sister Caroline.

Around this time, the girls spent time in Paris, having lessons with Pauline Viardot Garcia, for, when they appeared at Dublin’s Exhibition Palace, 28 August 1873, alongside the stars of the visiting Italian opera, in what was advertised as their ‘first appearance’, Mme Viardot was credited and their repertoire had taken a decided turn for the French. They sang Auber’s ‘Dans les défiles des montagnes’ (Les Diamants de la couronne) together, Caroline gave Gounod’s Serenade and Clara, Wekerlin’s ‘Les Saisons’. They sang more of the ilk (‘Fleur des Alpes’, ‘Il Segreto’) at the Dublin Exhibition, but then Clara must have gone travelling again, for in 1875, when father Doherty took a Benefit, at which the stars of the Carl Rosa company performed, only Caroline was in evidence.

However, Clara was back in Dublin 15 October 1877, for a double wedding. Sister Annie Merivale Doherty (1852-1878) married Arthur Crosse of the Paymaster General’s Office, and 23 year-old Clara married a certain George Curtis (b. Southampton, 1859; d. Washington DC, 21 August 1943). Aged 18. Mr Curtis was a son of an interesting family. His father, William [Shillito] Curtis had been a ship’s apprentice cook, who, landing in Yokohama, set up a market gardening and catering operation aimed exclusively at the English residents. He did very well, so young George—who had artistic ambitions—apparently went off to Paris, where he undoubtedly met Clara.

The double wedding was a double failure. Annie died giving birth, the next year, to her first child. Clara and George stayed together long enough to produce Violet Caroline Beatrice Curtis (b. Fulham April 1881; d. Melbourne 18 January 1922), but by the time Clara went on her international travels she was calling herself ‘widow’. Which she wasn’t. Both of them married, bigamously, again, and George—calling himself George Vaughan Curtis—had a long life and a modest career as a painter, latterly in America.

Clara, too, took what I have always assumed was her mother’s maiden name (although the family historians have a completely different ancestry for her) and went on the stage as ‘Clara Merivale’.

Her first engagement was with Carl Rosa, and she made her debut at Liverpool’s Royal Amphitheatre, 1 January 1878, singing Siebel, and then Lazarillo to the Maritana of Carina Clelland. When the company went to town, she sang the Gipsy Queen to the Bohemian Girl of Julia Gaylord.

The young singer caught on: she was hired for the Crystal Palace concerts (‘Nobil signor’, ‘a beautiful voice’), the Monday Pops (‘Lascia ch’io piango’, ‘Au printemps’), the Saturday Pops, the Boosey Ballad concerts, the Covent Garden proms (‘a pure voice, a correct style and sings with much expression’), the St James’s Hall Saturday Evenings, at Leeds with the Halle orchestra, and returned to Dublin to sing in Crotty’s leaving-for-Italy concert (26 April 1879). 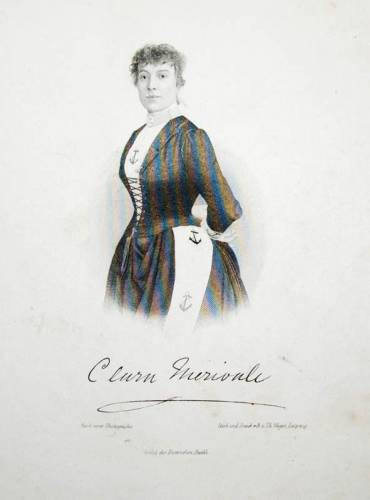 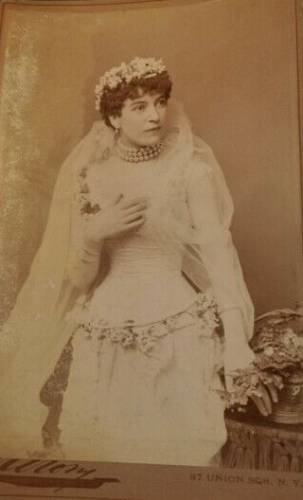 Clara, it seems, left too, for I next spot her 13 September 1880 … in America. Playing Edith in The Pirates of Penzance with the Boston Ideal Opera Company, and later in the year, filling the same role in D’Oyly Carte’s company on tour in England, with Laura Clement as Mabel. From there, she went to Carte and Charles Wyndham’s Company to play Bathilde to the Olivette of Esme Lee, and in 1882 to the Strand Theatre, London, to take over the title-rôle in Manola, followed by that of La Mascotte with Francis Gaillard and Richard Mansfield.

Now firmly fixed in comic opera, she toured for Carte as Josephine, Mabel and Patience, as Germaine in Les Cloches de Corneville and La Mascotte for Hogarth and Barry, in Polly and with the German Reed troupe, before returning to London with that troupe to play A Pretty Bequest, In Cupid’s Court, A United Pair et al at St George’s Hall. 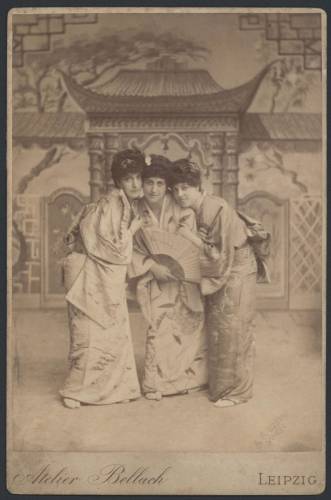 In 1886, she re-joined Carte to tour The Mikado on the Continent, but thereafter I spot her only in pantomime at Liverpool, at the Dublin Olympia with William Ludwig (‘Beautiful May’, ‘Dark are our sorrows’, ‘Eileen Alanna’, ‘I dreamt that I dwelt in marble halls’), at the Covent Garden proms, and alongside Emily Soldene in concert.

It may have been the Soldene connection that won her her next job. In Australia. Nellie Stewart, leading lady of the J.C. Williamson, Garner and Musgrove company, fell ill, and the managers hurriedly imported Miss Merivale as a replacement. But Miss Stewart got better, so Clara only got to play after she left. She sang in The Yeomen of the Guard, Patience, Cinderella, Princess Ida and Dorothy in Australia and New Zealand in 1889-1890. And she also got married. Or ‘married’. On 24 January 1890 she went through a ceremony with Austrian immigrant, Gustavus Maria Mayer, a sometime ‘mercantile agent’. Oddly enough it is gazetted as two years earlier. Anyway, her second marriage would be less fruitful even than her first, and seems largely to have been made for monetary motives.

She stepped in to play the leading roles in Miss Esmeralda and Faust up to Date with the London Gaiety Theatre company during their Australian tour, and in 1893 (12 August) she punted her all on a production of The Queen’s Lace Handkerchief with Martin Simonsen. It folded, and so did her career. 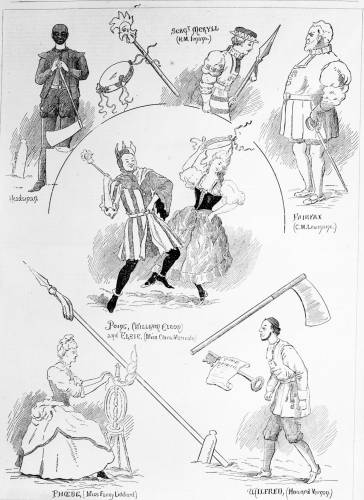 Next seen, Clara Kathleen/Katherine Mayer, 121 Barry Street, Carlton, Vic., was a partner in ‘The Federal Manufacturing Company’ with one Francis Herbert Forrest, dealing in perfumery and pharmacy. Notwithstanding that she had been bankrupted (accompanied by unspecified ‘extraordinary revelations’) in 1891 and again over the Simonsen production.

Miss Merivale’s life still remained colourful. Daughter Violet attracted the attention of a wealthy mining and business man, and Mr Mayer became an embarrassment. So she dropped him. And in 1900, Violet [Curtis] became Mrs Alfred Edward Langford of Mentone, Balaclava. Her husband was later crushed to death by a tramcar in Chicago. I see a letter in the Melbourne Age in 1933 from a ‘Mrs J. Maclaren of Mentone’ speaking of ‘her mother, Clara Merivale’. But, the Argus records Violet’s death on 18 January 1922. Three weeks before her husband’s mishap in Chicago. In 1940, Beryl Violet Langford (b Cheltenham,Vic 18 August 1906; d Vermont 12 April 1972) ‘only daughter of the late Mr and Mrs Langford’ married Gerald C B Letts. ‘The bride was given away by her brother, Jack’. There were two more brothers…

And mother?  Well, Clara apparently went back to England in 1902. In 1908, Gustavus sued for divorce on the grounds of desertion. Of course, with George Curtis still alive, he didn’t need to, but he probably didn’t know that. Anyway, he went ahead and married, or ‘married’ again and I seem to see him and his lady at 452 St Kilda Road as late as 1936. 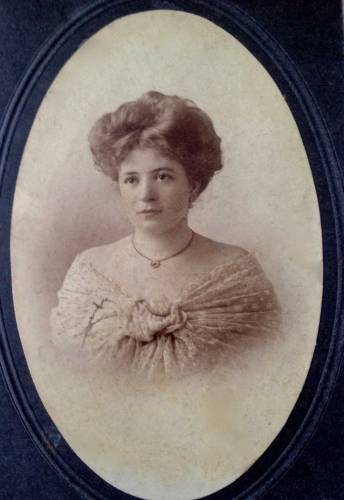 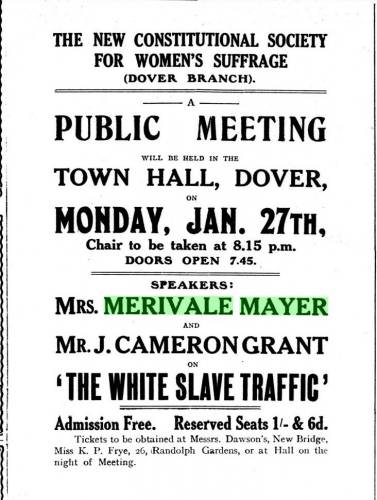 I don’t know where Clara went. The family historians shyly credit her with dying c.1890. Which we know is rubbish. In 1911, her mother (82, d. 1912) and sister Caroline (58, d. 1913), who is listed as ‘actress’ in 1891, can be seen living in St Leonards, England. They were previously in a ‘home for gentlefolk of limited means’ in Hastings. Mother registers that she had five children of whom four are alive. Since we know of the fate of Annie, that would mean Clara is still alive, somewhere. Mr Mayer and the Australian courts couldn’t find her and neither could I.

Until … A correspondent tipped me off to the 'Mrs Merivale Mayer' giving cooking lessons and being a suffragette in London in the 1910s, (https://discovery.nationalarchives.gov.uk/details/r/9f8d35ed-5335-4e0f-a0e8-b02f221e8dbe) the last of which mentions comes in 1918. In 1913 she is talking repeatedly at Dover, and she also gets awarded an 'Army Recruiting' button by Lord Kitchener. 'Hon Sec of the Australian and New Zealand Women Voters Association'. And there is this description in a 1914 suffragette diary ... ‘By the time the speakers, Miss Dransfield in the Chair, Mrs Merivale Mayer and Mr McKillop and Miss Fraser to help had arrived we were absolutely mobbed—and we got a huge gathering. The first Suffrage meeting of any kind which had been held in Isleworth. Mrs Mayer, as usual, was very disagreeable when she arrived, but it was really such a magnificent meeting she was quite pleased at the end, and, as usual, she spoke splendidly and we quite got the people round’

The last mention I find of the disagreeable Clara is less entrepreneurial:

‘THE COOKERY EXHIBITION. The cookery exhibition which was opened the Polytechnic, Hanworth-road, on the 4th inst., by Mrs. Merivale Mayer, closed on Saturday evening. During the week it was in progress nearly a thousand people attended the demonstrations.’

But I can’t find her in the 1911 census—maybe she was one of those suffragettes who hid under the bed when the census taker came? Unless she’s the Clara Mayer, aged 55, married, living alone ‘on private means’ at 8 Devonshire Rd, Holloway.

And, apparently, no death record in Britain  ... another effort to destabilise the British Empire ...? Maybe she’s the plain Clara Mayer who died in Wandsworth in 1933 with a couple of years chopped off her age. Maybe.

Could she be the Mrs Clara Mayer ‘housewife’ (address c/o National Provident Bank, London), aged 68, sailing in from the US of A in July 1921?

Anyway, after 1918, Clara seems to have renounced being in the forefront of anything available (‘Mrs Merivale Mayer on ‘The Sham of the White Slave Traffic Bill’ etc) ... which I assume means she died. There didn't seem to be any other way of keeping her quiet.

More in this category: « A Tailor Made Career Memories of Melba »
back to top