With special thanks to Bill Egan. 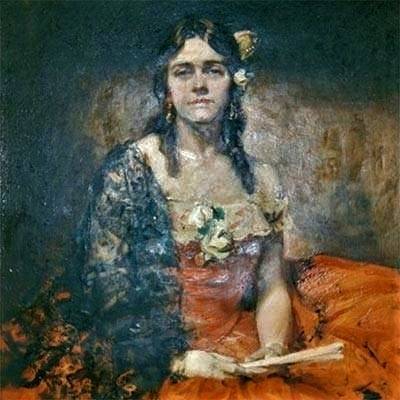 Sir John Longstaff’s 1925 portrait of the singing Edna Thomas. On display at Castlemaine Art Gallery. From the collection of Clunes Museum.When I reviewed Bill Egan’s wonderful book African American Entertainers in Australia and New Zealand: A History, 1788-1941 for On Stage, I fell into the deadly Two Thomas trap: I mentioned that Bill had omitted Edna Thomas, ‘The Lady from Louisiana’, who made very successful concert tours of Australia in 1924 and 1925. It transpires that Bill was aware of this Edna’s Australian visit, but he omitted her from his book because he thought she was white. And he was right.

Like many other writers and historians, I assumed that this was the same Edna Thomas who enjoyed a long, notable career on the New York stage. Now, after relentless delving into dependable archives, Bill has determined that there were, remarkably, two virtually contemporaneous Edna Thomases, and that their careers have been confused and conflated by many eminent authorities.

The first was Edna Lewis Thomas. Born Edna Lewis in Lawrenceville, Virginia, on 1 November 1885, she was of mixed race, light skinned, and identified as African American. Around 1914 she married black talent manager Lloyd Carter Thomas and she became a noted actor in what was known as the Harlem Renaissance. Following her stage debut with the black theatre company the Lafayette Players in Turn to the Right (1920), her subsequent prestigious Broadway stage credits include Lady Macbeth in Orson Welles’ controversial ‘voodoo’ production of Macbeth (1936), Lavinia in Androcles and the Lion (1938), Sukey in Elia Kazan’s production of Harriet with Helen Hayes (1943), Mamie McIntosh in José Ferrer’s production of Strange Fruit (1945) and the Mexican Woman in Kazan’s production of A Streetcar Named Desire (1947), a role she repeated in the 1951 film, her only screen appearance. 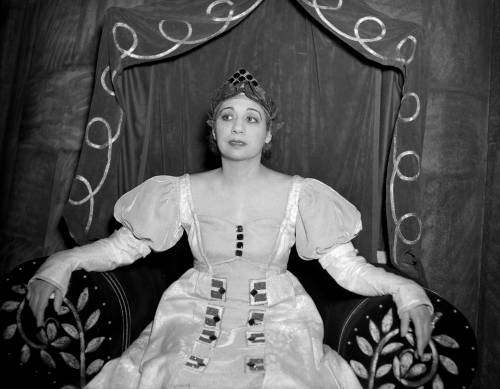 The acting Edna as Lady Macbeth in the Federal Theatre Project’s 1936 New York production of the Scottish play.

Edna supported her husband during the difficult Depression years, but from about 1930 she developed a lesbian relationship with Olivia Wyndham, an aristocratic British society photographer distantly related to Oscar Wilde. In 1930 Wyndham married a gay much-married British-American, Howland Spencer, though the marriage lasted barely a year. From then on, Edna, Lloyd and Olivia lived together in an apparently happy ménage à trois. Edna Carter Thomas died in New York City on 22 July 1974. She was 88.

Our second Edna Thomas was white. She was born Edna Alice Gery on 13 March 1888, in New Orleans, Louisiana—hence her billing as ‘The Lady from Louisiana’. She married Albert George Thomas in New Orleans on 30 October 1907. A mezzo-soprano, this Edna developed a large repertoire of ‘creole negro songs’ and ‘spirituals’. As she explained: ‘It was from my black mammy, Ninna, who reared me, that I first learned the negro spirituals. “Sperrituals” she calls them. She has been in our family so long that she insists that her name is Dare, same as my grandmother's, “Forginny Davis Dare is my name,” she says. From London last year I sent her a letter addressed “Miss Virginia Davis Dare, alias Ninna”, and she was mighty offended. “Oh, Mis’ Ella,” she said to my mother, “that alias is no good. Only criminals have dem aliases.”’

Successful forays to Great Britain in 1923 and 1924 culminated in a reported 12-week season at the London Coliseum. This was followed by her first Australian visit. She was brought to this country by J.C. Williamson’s, and although it was originally announced that she would appear on the Tivoli Circuit, which was then controlled by Williamson’s, she made her debut on a JCW variety bill at Melbourne’s Theatre Royal. On 15 September 1924 the Age reported: ‘The large audience at the Theatre Royal on Saturday night was treated to a delightful new turn. Edna Thomas, a pleasingly old-fashioned ‘lady from Louisiana’ received a remarkable reception. Her selections of plantation songs and negro spirituals, rendered in a rich contralto with the warm inflection of the Southern American States, were a great relief from the harsh jazz exhibitions, the usual offering, of her countrymen. Her quaint crinoline costume, reminiscent of the old colonial days, added the necessary atmosphere. The most pleasing item was a lullaby in the negro Creole patois.’ 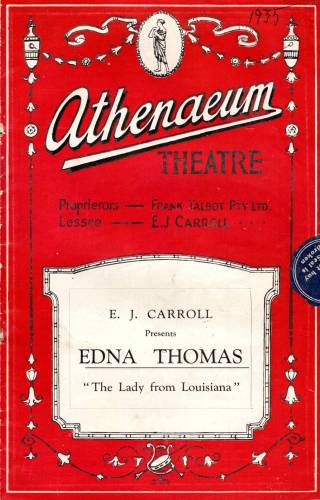 Programme cover for the singing Edna’s 1925 season at the Athenaeum Theatre in Melbourne. 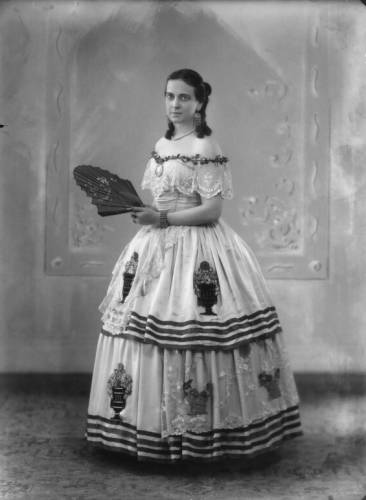 For reasons not yet established, Williamson’s presented Edna Thomas only in Melbourne. In Sydney she appeared not as part of a variety bill, but in concerts under the management of J.E. ‘Jack’ Brownlow. She made her Sydney debut at the Town Hall on 28 October 1924 in a concert broadcast by Radio 2FC. Most of Edna’s later Sydney concerts were presented in the Theosophical Society’s new Adyar Hall in Bligh Street, which had opened on 5 October (on 11 May 1929 the remodelled hall reopened as the Savoy Theatre). A farewell Adyar Hall recital on 13 December was so well attended that a ‘positively final’ second farewell followed two days later.

After this Edna returned to the United States, but only briefly. She was brought back by entrepreneur E.J. Carroll for a tour that started in Wellington, New Zealand, on 14 April 1925. She gave 45 concerts in New Zealand before her second visit to Australia, which opened with a recital at the Sydney Town Hall on 1 August 1925. Concerts in Melbourne (at the Athenaeum), Adelaide and several country centres followed. Even Melba was entranced. ‘I want everybody to go and hear her,’ she told the press. ‘She has a beautiful voice; rich and well-trained. Hers is the art that conceals art.’ The tour finished with a farewell concert in Sydney on 5 December 1925.

In 1933, in New York, singing Edna married for the second time. Her new husband was 58-year-old Warner Dare Huntington. After this, she appears to have retired from the concert platform. Details of her death are unknown. Her many records for the Columbia label attest to her artistry and several of her tracks—recorded almost a century ago—are now available on YouTube.

And to close the case, it’s recorded that in March 1925 the acting Edna was appearing with Paul Robeson at New York’s 52nd Street Theatre in revivals of Eugene O’Neill’s The Emperor Jones and The Dreamy Kid, while the singing Edna was in San Francisco, from whence, on 20 March, she sailed for Wellington in the Maunganui.

As Bill notes: ‘Basically this new research clearly establishes that the Edna Thomas who performed in Australia was white and therefore not eligible for coverage in my book. Once this is established some other things fall into place, such as why the extensive biographical material on Edna Lewis Thomas in sources such as the Routledge Encyclopedia of the Harlem Renaissance, Oxford University Press’s Harlem Renaissance Lives, and Bruce Kellner’s Dictionary of the Harlem Renaissance make no reference to her as a singer of spirituals (of course, she wasn’t!).

‘While I am pleased that is now cleared up, I am a little bit disappointed it obviates the need for an article explaining why a prominent African American performer was passing for white in Australia and New Zealand in 1924-1925.’