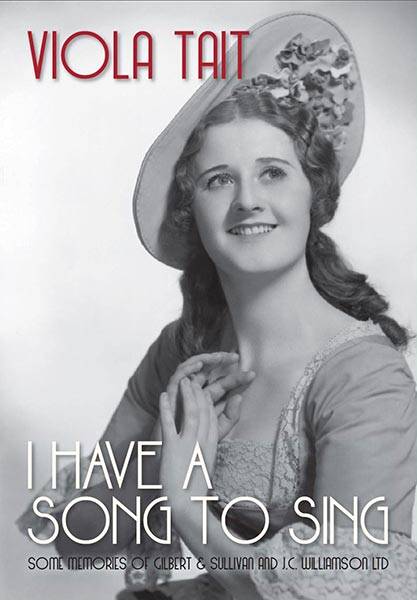 Cover, I Have a Song to Sing by Viola TaitIt was a great thrill to launch the e-book version of Viola Tait’s memoirs, I Have a Song to Sing, at Her Majesty’s Theatre in Melbourne on Wednesday, 17 July 2019. Thanks to Matthew Peckham and the management of the theatre who made the Hayden Room available to us including access to a cash bar. First published in December 2018, the complete book is now be available as a free download from the THA website.

Diana Burleigh, the head of THA’s events committee, organised a full afternoon of speeches and songs. The first guests arrived at 3pm. In the background archival recordings of G&S stars from the 1930s, 40s and 50s, courtesy of THA member Rob Morrison, could be heard until the hum of the crowd drowned out their voices.

Proceedings kicked off at 3.30pm with an introduction by Simon Piening, THA President, who began by saying:

Today is a very special day for Theatre Heritage Australia—the e-book we are launching has been literally decades in the making, and represents the culmination of a number of years work by members of the committee.

He went on to note:

For those of us interested in the field of Australian theatre history, Viola Tait stands as a huge inspiration—she dedicated a large part of her life to researching and documenting Australia’s theatre history, and indeed published two very important books on the subject—one of which, A Family of Brothers, remains to this day, the definitive account of the Tait family’s involvement with the J.C. Williamson company.

In addition to being a theatre history buff, Viola Tait was a performer, and in fact we will hear a snippet from a recording of her singing, a little bit later.

Viola’s knowledge of Australian theatre wasn’t just learnt from books or from digging through old newspapers—as a performer herself, and through her marriage to Frank Tait, Viola was at the very centre of Australian theatre during a most important period. Which is precisely why her memoirs are such a valuable record.

Following Simon, Mary Murphy, the honorary archivist at Her Majesty’s, spoke briefly and screened an in-house film on the history of the theatre, the JCW and Tait years to now under Mike Walsh’s management. The film also included a short clip of Viola when she appeared on the television show This is Your Life to celebrate the achievement of JCW choreographer Betty Pounder.

Viola’s daughters, Isla, Ann and Sally, who were in Europe celebrating Sally’s birthday, sent a message of support, which Simon read out:

It is thrilling that Viola Tait’s book is being launched as an e-book at Her Majesty’s theatre today. Viola’s daughters, Isla Ann & Sally, her own ‘Three little Maids’ are no longer her ‘Three little maids from School’, as the youngest sister Sally is 70 today! Sally’s celebrations are in Sicily in an idyllic location far, far away from Her Majesty’s. We sisters sincerely regret that we are unable to be with you today. We will raise our glasses to toast and congratulate Theatre Heritage Australia with utmost praise and heartfelt thanks. Elisabeth Kumm, Judy Leech and their wonderful team have been so dedicated in making our Mother’s memoirs come to life. We can picture the scene at Her Majesty’s. The theatre was our second home, and the venue for Viola’s previous book launch, Dames Principal Boys etc. In her speech in 2002 she declared it was the happiest day of her life. We know how elated Viola would be on this occasion, as we are In its fruition. Thank you dear Theatre Heritage Australia for your faith in making her dream come true.

We were also treated to a couple of songs from Viola’s repertoire. Two talented young singers, Jane Magao and Ella Broome, both members of the Gilbert and Sullivan Opera Victoria, performed a song each: the ‘Laughing Song’ from Die Fledermaus and ‘Poor Wandering One’ from The Pirates of Penzance, accompanied on the keyboards by Tim Wilson.

We then heard from Elisabeth Kumm, the Editor of I Have a Song to Sing, who spoke about the background and development of the book, the joy and privilege of working with Viola back in the early 2000s, finishing the book with Sally Bell after her mother’s death, reviving the manuscript in 2018 and the eventual realisation of the project with the assistance of Judy Leech and Simon Piening and a small team from THA.

Very fittingly, the last song of the afternoon was performed by Viola herself singing an aria from The Dancing Years, a rare recording that first came to light on one of Frank Van Straten’s Nostalgia programmes on ABC radio in the 1990s.

Our final speaker was Charles Tegner, a grandson of Charles Tait, the eldest of the five Tait brothers, and a nephew of Viola by marriage. We were extremely privileged to have Charles as our special guest and to launch the e-book. Charles regaled us with memories of Viola and her family and their generosity when he first arrived in Australia from England, landing at Brisbane Airport in April 1967.

I did not stay in Brisbane but went straight to Sydney and after catching up with our E.J. Tait cousins and working there for a few months I moved to Melbourne. The Charles, John and Frank Tait families again made me very welcome. At one time I spent few weeks staying with Viola and her family in Hopetoun Road. It was then that we really got to know each other and I remember hearing her still magnificent voice as she played her piano. Through Viola’s amazing network of friends, I rented a miniature self-contained bedsitter in Toorak Village.

He went on to say:

I will always remember Viola for her wonderful welcoming hospitality, enthusiasm, generosity and enjoyment of life and her interest and encouragement in what we were all doing. I Have a Song to Sing is a wonderful read which brings to the fore all of these lovely qualities. We read of her brilliant career sprinkled with many amusing anecdotes and recollections of times with the artists of opera, ballet and theatre. Undoubtedly she was an outstanding and loving support to her husband, Frank, throughout their married life; a loving mother to their children and a great friend to many.

At the conclusion of his speech, Charles hit the switch on the computer and the cover of the book appeared on the screen behind him. And with that, the I Have a Song to Sing e-book was launched on the THA website.

As Elisabeth noted in her address:

And now it’s the turn of Theatre Heritage Australia, here in a theatre that meant a lot to Viola —and to her family. The scene of many a first night—and the place where she launched her first two books.

It has been quite a journey—and I think Viola would have been delighted that her story is now available to be enjoyed by anyone visiting the THA website.

Formal proceedings were finished by 5pm and as guests mingled and sipped on their drinks, the THA Committee congratulated all involved on a highly successful and enjoyable launch.

The e-book version of I Have a Song to Sing by Viola Tait is available for free download from https://theatreheritage.org.au/viola-tait-ebook-download, in pdf, epub or mobi version.