Earlier this year Patricia Convery gave us a "virtual tour" of the 19th century theatres that once graced Melbourne's Bourke Street. Two months ago, for our next Theatre Heritage Australia event, we were permitted, thanks to Mary Lewis, State Library of Victoria's Architectural Drawings Manager, and Peter Johnson, architect and SLV volunteer, to delve deeper into three of these: the two Theatres Royal and what eventually became known as The Tivoli. Not only could we hear all about the three, we could hover over sheet after sheet of beautifully detailed plans and watercolour drawings of these buildings. Where to start? Surely with the first Theatre Royal on the north side of Bourke Street, built in 1855 by one John Black, a British migrant who, thanks to Victoria's goldfields, had amassed for himself a fortune. The theatre, designed by architect J. R. Burns, was as big as London's Covent Garden with an elaborate stage large enough to accommodate the mounting of any extravaganza or "glorious pantomime", and seating for well over 3000 (the theatre was also the venue for huge religious meetings). London's Drury Lane was the very first Theatre Royal, the very first to have legal status conferred upon it. It was the real beginning of a regularised world of the theatre. In 1639 William Davenant obtained a Royal Patent (from Charles I), under the Great Seal of England, to erect a theatre. But it was not until 1663, under Charles II, that the first Theatre Royal actually came into existence. Question - where are records for the patents for the many Theatres Royal in the Australian colonies? Almost two hundred years later, Melbourne's Theatre Royal opened, in mid-July, 1855, just two weeks before the opening of George Coppin's Olympic (the Iron Pot) in Exhibition Street. One year later, Black "went bankrupt" and was forced to sell the theatre - for about one quarter of the cost of building it. Actor-manager George Coppin and actor Gustavus Brooke bought the theatre. It was rarely profitable, to them or to other lessees. No plans survive but some posters still exist, discovered in 1965 in a cottage in Richmond. They had been used as ceiling insulation. And happily for us, Samuel Thomas Gill sketched the interior of a theatre - albeit the Queen's Theatre Royal in Queen Street- this can be viewed at the State Library of Victoria's current exhibition – “Australian Sketchbook". Accompanying the exhibition is a recent SLV publication, S . T. Gill and his Audiences by Professor Sasha Grishin. In March 1872, the theatre was destroyed by fire but within months, Coppin had the theatre rebuilt, fronted by a high, three-storey hotel. And this is where we first encounter the architect George "Diamond" (known for his fondness for diamonds) Browne. Born in Melbourne in 1847, he was the son of Charles Brown(e), builder, and Mary Fletcher, who had arrived in 1841 in Port Phillip as assisted immigrants on The Wallace, along with their first-born, Henry George.

At 21, in 1868, young George was in business as an architect and surveyor. The following year he married Annie Price, daughter of John Price, Northcote-based builder, and wife Rachel Hall. Annie was born in Sawtry, England, around 1847. By 1871 George had obtained the patronage of W.J.T.(Big) Clarke and son, later Sir William Clarke, involving the construction of city houses and commercial buildings, commissions for Sunbury's Rupertswood, Ballarat's Academy of Music (now Her Majesty's), Lauder's Riding School in South Melbourne, a cheese factory in Berwick, and the rebuilding of the Melbourne Cricket Ground Grandstand. In 1872 with his father Charles as contractor, George designed the new Theatre Royal in rococo Victorian style, the facade surmounted by an enormous royal coat of arms. He increased the depth and height of the auditorium (to 25.5 metres x 18 m) and increased the seating capacity to almost 4000. The stage also was deepened - to 36 m. Scenes of Melbourne and London were painted under the dome, from which hung a huge chandelier. In 1875 the 28 year-old George Browne took, as an apprentice, 20 year-old William Pitt, the son of George Coppin's scene painter and business manager, William Pitt. William Pitt senior was born in Sunderland, Northern England, around 1820, and arrived in Melbourne in 1853 with his wife Jane, nee Dixon, also from Sunderland. WP senior had worked with Arrigoni, Hennings and Wilson on Coppin's Cremorne Gardens - he had painted scenery for, among others, G. V. Brooke at the original Theatre Royal. He was the first treasurer of the Victorian Academy of Art and he exhibited his work in its shows. At the time of his death in 1879 he was licensee of the Theatre Royal's Cafe de Paris.

By 1879 William Pitt junior was experienced enough to take on the responsibility of designing the Melbourne Coffee Palace, the city's first temperance hotel, which, built in Bourke Street, became one of the tallest buildings on the skyline. 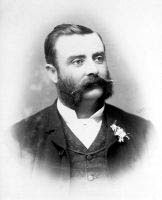 Around this time, George Browne left Melbourne for Sydney, under some sort of cloud. He continued to work in New South Wales: he also tendered for a Brisbane theatre. He was estranged from his wife Annie, who had remained in Victoria. George, the "flamboyant and mysterious",went to England - it is not known when exactly - where he died alone in 1911, of gastric carcinoma at Fulham Workhouse.

William Pitt junior went on to design, in 1880, Falls (Queens) Bridge over the Yarra River and the head office of the Premier Permanent Building Society. Then Coppin's "Improved dwellings and Lodging-house" (later known as Gordon House), alterations to the Old Colosseum in Bourke Street and the erection of the Victoria Hall behind it, the Princess Theatre in Spring Street in 1886, the Federal Coffee Palace in Collins Street, and in collaboration with Ellerker and Kilburn, the new Melbourne Stock Exchange. The Rialto, the Olderfleet and Pitt's Buildings followed.

In 1889, at 34 years of age, he married Elizabeth Mary Liddy and later became a Collingwood city councillor, including a term as mayor. He represented the council on the Melbourne and Metropolitan Board of Works and was a member of the Melbourne Harbour Trust. Interstate commissions included theatres in Adelaide and Sydney, and in New Zealand.

Having begun, in 1866 in Bourke Street, as the Varieties Music Hall and followed by a series of "lives" - The Opera Comique, the Henry Hoyts' Opera House (designed by architect George R. Johnson) - until being de-licensed in 1899 and demolished, due to complaints about the theatre's safety and lack of proper amenities, in 1901 Harry Rickards' New Opera House opened, a new theatre designed by William Pitt. A newspaper article described it as French Renaissance but it more closely approached a predominantly Moorish style, popular for variety theatres at the time. The New Opera House had three levels, including stalls, but seated only 1539. (The posts supporting the dress circle and the gallery remained until 1956, when architect Dudley Ward redesigned the auditorium.) The stage was huge - 18.3 m x 19.5 m - and, furthermore, there was a fly-tower. After eleven years, in 1912, Hugh D. McIntosh, Rickards' successor, changed the name to Tivoli Theatre. Across the road, and returning to 1904, the Theatre Royal was now owned and managed by the great entrepreneur Julius Cassius Williamson who had arrived in Australia thirty years earlier. He had the theatre's auditorium gutted and then commissioned William Pitt to redesign it, although the veritable forest of posts was to remain. The seating was altered from four levels to three. The theatre continued until 1933, the period of the Great Depression, when too heavily-taxed admission prices forced it to shut down. The Theatre Royal closed its doors in late 1933 and it was demolished in 1934. Currently upon the site is the Target Store - other department stores including Mantons and J .G. Coles preceded this "manifestation".

So what is left now? A plaque, somewhere in the administration offices of Target, commemorating the two Theatre Royals and, somewhere, someone possesses - cherishes? - one for The Tivoli. How very relieved we are to know so many plans, drawings and diagrams are being looked after, so meticulously, by the State Library of Victoria, and how very lucky we were to be able to view this particular collection, to marvel at the designs, the delicate colouring, the exquisite detailing.