Talking the Walk: An account of THA’s first event for 2015

On a hot Sunday morning some weeks ago in February, a small group of THA members joined Patricia Convery in the Bourke Street Mall outside the David Jones Menswear Store. The occasion - Patricia's Bourke Street Theatre Discovery Walk.

The long-term weather forecast had predicted high temperatures for that particular day - what we had not been prepared for was the positive invasion of scouts, guides, cubs and brownies, plus attendant family members. We appeared to be placed squarely in the middle of a Grand Jamboree - the deserted city Sunday in Melbourne was obviously a thing of the past!

Patricia's intention was to slowly process up Bourke Street, towards Spring, and to point out the sites of the many theatres that once lined that street, beginning, of course, with the site of Melbourne’s first theatre, in 1841, the Pavilion (aka Victoria Theatre Royal, Theatre Royal and Victoria Saloon) where we currently stood. What with the crowds, the buskers and the heat! we felt it best to find a - relatively - quiet retreat close by. Which is how we ended up in the Midtown Plaza, on the site of St. George's Hall, later Hoyts' Pictures, then Manton's Store. and next-door to the site of the 1855, and later 1872, Theatre Royal - now Target Department Store. Fortunately no restaurateur took exception to our "borrowing" his tables and chairs - the adjacent cafe remained closed all morning.

Patricia gave us a wonderful, and illustrated, talk on the theatres that once graced our city; she had originally planned to begin on the corner of Queen and Little Bourke Streets with the Queen's Theatre Royal, built in 1845 by city councillor and often-times mayor, John Thomas Smith. (Melbourne's first ballet performance took place here only two months after the theatre's opening - its director George Selth Coppin) . Given the temperature, this walk may well have been more than a little trying.... Another building in the vicinity, St. Patrick's Hall, which had opened as the First Legislative Council of Victoria in 1851, was later converted to a theatre and dance studios and was home to Victoria's Ballet Guild in the middle of last century.

Before we'd moved from the Pavilion site in the Mall we learnt about two other theatres in the same strip, one built just before the First World War - the Britannia, the other was the Royal Colosseum from 1869 (aka Victoria Hall, Melba, etc.). The former had a string of "lives" - it is now Centrepoint Arcade the other became a G. J. Coles store.

Opposite the New Theatre Royal where we were now perched another theatre with a Phoenix-like past existed - from 1866 through to 1967. This of course was the Tivoli, originally Australia Hall but renamed, almost immediately, as Varieties Music Hall. Varieties Opera-Comique followed, then Prince of Wales Opera House, the New Opera House and finally three re-incarnations as the Tivoli Theatre. In 1869 the Victoria Club Hall (ending as the Paris Cinema in 1967) had opened close by what became the Tivoli. An arcade exists there now - Tivoli Court - but sadly not a single whiff of anything remotely theatrical. A few doors up Bourke Street was site of the Academy of Music (1876) later called the Bijou Theatre now occupied by a former Commonwealth Bank and a car-park.

The Bourke Street entrance to the 1891 Siege of Paris Cyclorama extended through to Little Collins Street. The cyclorama was partially demolished in 1901 and converted into shops and a printing business. During the 1920s Specialty Press occupied the building and for more than fifty years supplied J. C. Williamson's with all their theatre magazines and programs. Georges Apartments, adapted from the old building, now grace the site.

Before continuing up Bourke Street, there was mention of the King's Theatre - (1908) in Russell Street. The King's was demolished in 1955 and rebuilt as Barclay Cinema, then Greater Union Cinemas. It is currently undergoing another total reconstruction. Also in Russell Street, but in the opposite direction, a building named Total Abstinence Concert Hall had existed since 1845. In 1930 it became the Savoy Cinema, Total Theatre, and later in 1965, the Lido, a venue for nightclubs and cabarets.

Returning to Bourke Street - seven years ago we could have viewed what had been the Apollo Music Hall, Eastern Arcade, on the site of the 1862 Haymarket Theatre. Almost overnight, in 2008, after a massive attempt to halt it, the Apollo was sickeningly demolished. Absolutely no trace remains.

But happily, what was Australia's first film studio, the Limelight Department, still exists within its 1890 premises, now the Salvation Army Temple. This site began its life in 1863 as the Polytechnic Hall, then People's Theatre, and finally as Nuggett Music Hall, before being rebuilt in 1888 for the YMCA. The Attic Limelight Studio has survived intact, isolated on the roof, and now houses a museum. Salvation Army officers regularly conduct tours and talks. Almost at the corner of Bourke and Spring we reach, of course, the Palace/St James Theatre - or what now remains of it. The site at 20 - 30 Bourke Street, in the mid 1850s, was home to a hotel. When it was destroyed by fire in 1911, a theatre was built that would become known as the Palace. Originally with quite an ornate exterior (to match the lavish interiors that theatre architect Henry Eli White was commissioned to execute in 1916) when the theatre was Brennan's National Amphitheatre and owned by Benjamin Fuller, in 1934 both the name and the facade changed. This exterior and what remains of the interior's two gallery levels, marble staircase and Louis XIV-style plaster decor is at the heart of a current ongoing battle between developers and Palace Theatre supporters.

Although not in Bourke Street mention must be made of three theatres nearby still in existence today – in Spring Street, the beautiful 1886 Princess that had its beginnings in 1854; in Exhibition Street, Her Majesty's, also opened in 1886 and the 1928 Comedy where, in 1855, the first theatre on the site was Coppin’s Olympic.

These are just the bare bones of Patricia's talk - there are so many stories behind all these theatres, so many personalities, links, events, coincidences... We look forward to reading all about them when Patricia's article "comes to our screens" in the not too distant future!

Postscript: At 1 pm following the talk, we scattered in several directions - and those directions most certainly included several sites of Melbourne's former glorious - and heady - theatrical heritage. 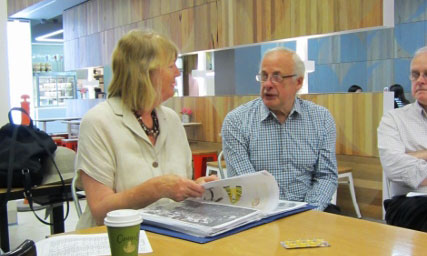 Patricia with Ross Turner during her talk