In an area given over to factories, warehouses, studios, workshops and storage facilities, is it such a great surprise to find in Fink Street (surely named after 19th century Marvellous Melbourne's Benjamin Fink?) Preston, Australia's principal scenic design studios?
When entering this large, light-filled space what first meets the eye is the vast wall of scenic paint tubs, all with the distinctive yellow label designed by Scenic Studios' co-founder Ross Turner himself. The range of paints is huge, based on the Winsor and Newton palette, dating from the 19th century. In addition to these water-soluble, acrylic paints, there are special textures and glazes, primers and extenders and a shelf of "fluro" colours. Scenic Studios also stock various widths and weights of canvas, wool curtaining, gauzes and cloths for specific effects, velvets, muslin and scenic netting for cut cloths. 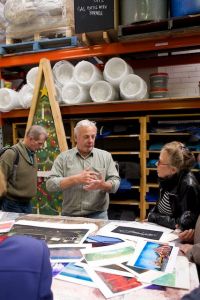 Ross Turner shows his workUpon a solid work-bench Ross set out various examples of some current scenic artists' work; backdrops for the Queensland Ballet Company's production of CINDERELLA – rather different from the upcoming Australian Ballet version (one scene incorporates a huge curtain of tinted fringing – presumably for the dancers to move through) and a musical note, a tiny part of a backdrop for the new production of HOT SHOE SHUFFLE, specially treated and glitter-sprinkled foam.
Scenic Studios include in their "repertoire" exhibition, display and museum design, also that required for television productions, conventions and parties.

Ross let us view his own designs for the Singapore Ballet Company's COPPELIA – beautiful watercolours working on a scale of 1 : 70.
Where digital printing is requested the original artwork is brought up to 50 – 70% colour strength and then worked on by hand for a more detailed and vibrant finish.
Hundreds of painted backdrops are for hire, for both professional and amateur companies and groups, and that includes schools (so many schools now regularly present musical plays – not many schools have the facilities nor the know-how to create their own backdrops for their shows). Sizes vary from 12 – 16 metres in width and 6 – 12 metres in height. These are folded and stored in large sacks. Canvas quality varies – this also affects the weight of the finished backdrop. The depiction could well be a toyshop, railway station, circus setup, forest, ballroom, village, Covent Garden, restaurant, city street – you name it!

Since its inception in the late 1980s Scenic Studios, the "brainchild" of Ross Turner and now "retired" Paul Kathner, has had a few homes – Kensington, Flemington and North Melbourne – and now here in Preston. This particular home is in two parts, the other half just opposite across the road. Because the ceilings here are a certain height, the painting of each backdrop is done on the flat, laid out upon the floor, that is, not attached to a vertical frame. 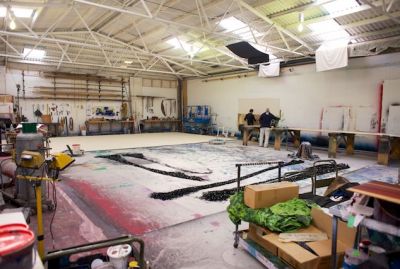 Workshop areaThe canvas is fixed securely and squarely. If it is to be primed the ratio is 3 parts paint to 1 of water, starting from the "top" and working down with a team of people using big soft paintbrushes in a criss cross method. Backgrounds can also be applied using a spray-gun – from a canister the watered-down paint is filtered through a double thickness of gauze or nylon netting. Shoes off – sox only! Background colour is never mixed with white but with water, and gently feathered or sprayed with the same so that colour or tones merge into one another.
If not using a digital printing method the artwork is gridded up into squares and then transferred to the canvas (over the background colour or shade) via charcoal or chalk grid. With an upright, secured canvas flat the drawing or design can be projected from a transparency. It is important that every drawn detail makes sense – that it is recognizable when it comes to the painting stage – the more thorough the drawing the less work (and pain!) later on.....
So many do's and don't's and so many things discovered along the way – so many tricks and effects, not to mention happy accidents!
Nowadays not many set designers employ a painterly style and no scenic artists seem to be emerging from the production courses within the colleges. No longer do television stations hire, on a permanent basis, scenic artists as they once did, back in the 60s, 70s and 80s. But artists and designers are out there and once gripped by the theatre bug the task of producing a scenic background continues to teach the painter just so much. 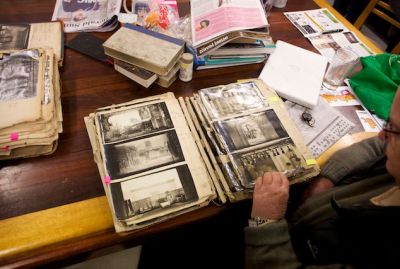 Diana Burleigh leafs through the JC Williamson albumsRoss let us leaf through huge, and now, alas, rather frail and brittle, albums full of exquisitely clear black and white photographs of J.C. Williamson sets and productions dating back to the early 20th century. Although all are identified – many in fine copperplate hand – not a lot of dates are in evidence. The studio's library is a wonderful mix of art and reference books and magazines, journals and albums, and on the walls, along with many Scenic Studios production photos and contemporary theatre posters, there are several framed watercolours of designs for pantomimes, executed by an English artist and sent to Australia for the scenic artist here to reproduce. These were also around one hundred years old.
Is Preston the new Theatreland? where it all begins and where we were granted the opportunity to glimpse the processes involved in the creation of a backdrop, curtain or scrim, for a ballet, a play, an opera or a musical, a setting or display for an exhibition, museum or special event.

Note: A complete set of images taken on the day are available for members to view on our  flickr site. These flickr images are available in various sizes for downloading (but are for personal use only).

More in this category: « Scenic Studios tour Talking the Walk »
back to top