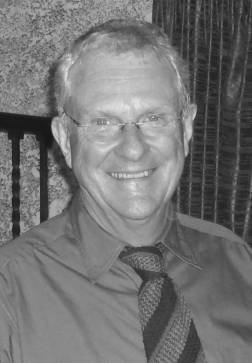 We pay warm tribute to David Cullinane who passed away peacefully on 12 August 2022, aged 87.

David was an enthusiastic supporter of Theatre Heritage Australia (previously the Victoria Theatres Trust). For 13 years he edited every one of the 52 printed editions of our quarterly journal, On Stage, from its inception in mid-1999 until it transferred online in mid-2012.

David’s first love was film. A keen amateur movie maker and a regular attendee at Melbourne’s film festivals, he established a popular film appreciation group at his first employer, ICI Australia, where he worked on the company’s in-house magazine. He founded the Society of Business Communicators, a professional writers’ association, and was a member of the Melbourne Press Club.

After working for some months in London, he returned to Melbourne and re-joined the team at ICI. Stints at Alcoa Australia and The Body Shop followed, again producing their in-house magazines.

David fully embraced emerging printing technologies, and his computer-based design work for On Stage was in many ways ground-breaking for its time. All his hard-copy editions are now fully accessible on our website.

Over the years Frank has amassed a vast collection of Australian theatre memorabilia. He was director of the Victorian Arts Centre Performing Arts Museum from 1984 until 1993. For 15 years Frank researched and presented ABC Radio's popular Nostalgia feature over Melbourne's 774. He contributes historical articles to many theatre programs and journals. His books include National Treasure: The Story of Gertrude Johnson and the National Theatre (1994), The Regent Theatre: Melbourne's Palace of Dreams (1996), Tivoli (2003), Huge Deal: The Fortunes and Follies of Hugh D. McIntosh (2004), Florence Young and the Golden Years of Australian Musical Theatre (2009), Her Majesty's Pleasure (Her Majesty's, Adelaide. 2013), Her Majesty’s Theatre, Melbourne: The Shows, The Stars, The Stories (Australian Scholarly Publishing, Kew, 2018), and Hanky-Panky: The Theatrical Escapades of Ernest C. Rolls (2020).