Written by Elisabeth Kumm
One of the principal objectives of Theatre Heritage Australia is to document Australian theatre history—and we are delighted to be able to provide our readers with access to a new biography written by Cathy Koning on the Australian soprano Dorothy Rudder (1893-1940), titled Dainty Diva. 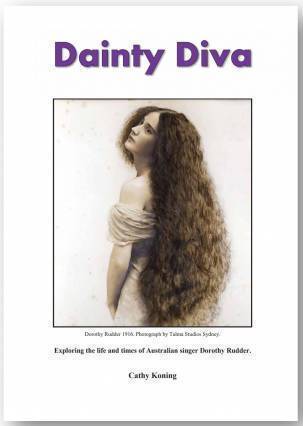 THIS IS THE FIRST BIOGRAPHY of Australian soprano and variety theatre artist Dorothy Rudder, unheralded today but well-known in the 1920s and 30s.

Cathy Koning became interested in Dorothy Rudder when her husband inherited an old battered suitcase belonging to his great aunt. The many treasures discovered within the suitcase revealled the story of a courageous woman with a wonderful voice who was compelled to perform no matter what life threw her way.

As Koning discovers, it was not an easy path and the peripatetic life of the theatre often meant grabbing what opportunities you could. For years Rudder was diverted into vaudeville and musical comedy, before landing her first opera engagement with J.C. Williamson's Grand Opera Company in 1932.

Along the way economic depression and two world wars contributed to her changing fortune, as did a brief marriage that ended in a sensational and very public divorce. But throughout she remained positive—and though largely on her own—she received the support of a devoted sister and wide circle of women friends and theatrical contacts.

As Frank Van Straten notes in the book’s forward: “With its treasure trove of fascinating illustrations, Dainty Diva is an invaluable exploration of a now largely forgotten world of Australian and international show business.”

Dainty Diva may be accessed or downloaded from the THA Digital Collection at https://theatreheritage.org.au/digital-collection/

More in this category: « The very best of… Double-Act »
back to top